During a search for new Podcasts to listen to I came across a music one that was focusing on Rolling Stone’s 500 Greatest Albums list. The 500 takes each album an episode and discussing it with a featured guest. I got about ten minutes into the first one and decided that I wanted to take on the music challenge, too. Though a number of the 500 will be albums I’ve heard before, or even love, I’m sure there will be quite a few that I’ve never heard in their entirety or haven’t played in a long time.

I’m trying not to cheat and look ahead, so each album will be a bit of a surprise.

I’ve been in a bit of lyriquediscorde-writer’s block lately, and have been hungry for some inspiration. This just may be the thing.

I’m going to start at the end, at 500, and go from there. I’ll take the album and listen to it, a few times, more than a few times maybe. I’m going to take my time with this project and I will post my thoughts, feelings, reactions, along with a little history, about each album. I’d love to hear what you think of each of the albums, too.

I’m sure there are albums I will feel were left out of this list. I’m sure there will be a few that I don’t agree with personally, ones that don’t resonate with me. All that said, I’m looking forward to the listens, and the new motivation for some music writing.

From Rolling Stone: At a time when formulaic albums by Master P and Puff Daddy topped the charts, OutKast unleashed explosive hip-hop that deployed live musicians, social commentary and a heavy dose of deep funk. Hits like “Rosa Parks” put the duo’s hometown “Hotlanta” on the rap map.

A Little History: Aquemini is the third studio album by OutKast. It was released on September 29, 1998, by LaFace Records. The title is a portmanteau of the two performers’ Zodiac signs: Aquarius (Big Boi – Antwan Patton) and Gemini (André 3000 – Andre Benjamin), which is indicative of the album’s recurring theme of the differing personalities of the two members. The group recorded the majority of the album in Bobby Brown’s Bosstown Recording Studios and Doppler Studios, both in Atlanta, Georgia. (from Wikipedia)

With organic chemistry and imaginative musicality, Big Boi and Andre 3000 blazed a trail for sounds that defied labels and for eccentric artists to follow. (from Revolt)

The album was certified Platinum in November 1998, only two months after its release, and was certified Double Platinum on July 2, 1999, by the Recording Industry Association of America. Aquemini peaked at number two on both the Billboard 200 and the Top R&B/Hip-Hop charts.

Four of the album’s tracks had already or would later become singles, although some were limited (promotional) releases and not available commercially. The record also received rave reviews from music critics, who praised the album’s musicality and unique lyrical themes. It was ranked at number 500 in Rolling Stone‘s list of the 500 Greatest Albums of All Time. (from Wikipedia) 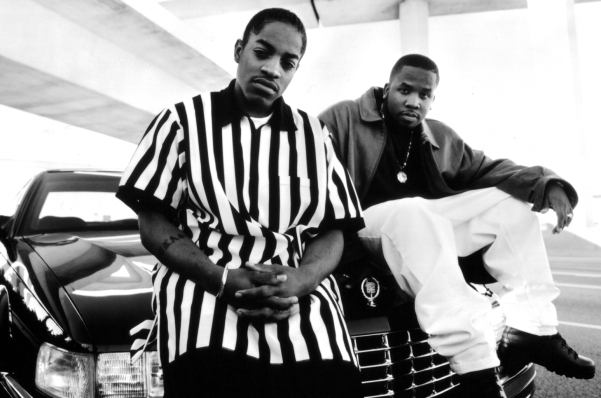 My Thoughts: So, first off the only exposure to OutKast I had before now was their later hits “Hey Ya” and “Miss Jackson”, and “I Like the Way You Move” (featuring Sleepy Brown). Beyond that, I’ve not been all that familiar with their music, and I’d never listened to an album of theirs in entirety. Before now, I’d never heard anything off of 1998’s Aquemini.

I’ve never explored a lot of the hip-hop and rap genre until recently. Blame it on my New Wave/Goth formative years, or my Lilith/Grunge/Grrrl twenties in the nineties which led into the Libertine-Indies and Alt-Country 2000s, which all possibly kept me from making my way to hip-hop and rap beyond what was “mainstream”.

But, I have really cool kids with exceptional and all over the genre map music taste, something I’m very proud of, and grateful for, and they have brought a lot more music variety into my already music-varied life. My younger daughter introduced me to a lot of the hip-hop and rap genre this past year. My daughter’s introductions, along with my binge-watch of the TV Series “Atlanta”, have been my gateways in, and I’ve been enjoying the learning curve that’s come along with it. I think it primed me for really enjoying the #500 album, OutKast’s Aquemini.

“Hold On, Be Strong”

The opening track, “Hold On, Be Strong”, is something I’d like to listen to it first thing every morning. It feels meditative, motivating, and soothing all at once. Something I know I’m in need of at the start of the day.

Aquemini opens with the introductory track “Hold On, Be Strong,” a brief but beautiful mediation, a hymn of preparation of sorts that is reminiscent of interludes from Earth, Wind & Fire albums. (from Revolt)

My favorite track off the album is, without a doubt, “Liberation” (featuring CeeLo Green). I love the funk elements, the bass, the fusion-feel to the sounds, and the lyrics. There is something that feels very 70’s to me, but that also reminds me of some of the ’90s that I seemed to have missed (reminiscent of A Tribe Called Quest and Fugees).

Also, Erykah Badu’s inclusion in the song is pure magic. It gives the song an extra dose of soul and vocal wings.

Some other favorites are “West Savannah”, and “Skew It on the Bar-B” (featuring Raekwon. The latter of the three makes me want to move. After first listen I threw it on a workout playlist, and find myself wanting to move whenever I hear it. The other two are just fantastic lyrically. I love the storytelling aspect and the shoutouts to where OutKast is from.

Another must-hear/must-play for me is track 12, “SpottieOttieDopaliscious”. This one feels like a meet-up/mating of Jazz Fusion and ’70s Funk. I love the sounds, the mood, the feel, and the vocals. It feels a little bit space-age, a little bit sexy, and a lot groovy. This is my favorite to play while I’m driving – especially in the early morning, or late at night.

What do you think of OutKast’s Aquemini? Do you agree with its inclusion in the Top 500?