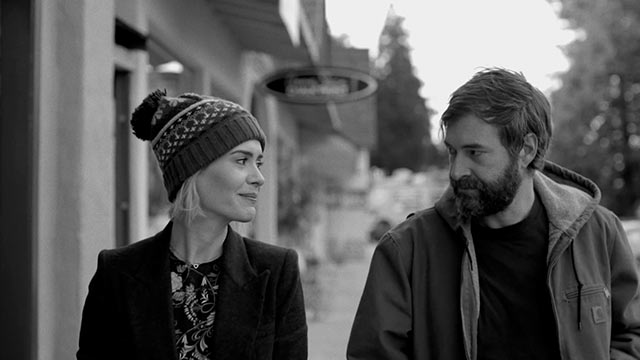 Blue Jay was directed by Alex Lehmann in his fictional feature debut, from a screenplay by Mark Duplass. It stars Duplass and Sarah Paulson. The film had its world premiere at the Toronto International Film Festival on September 12, 2016.

The film was released on October 7, 2016, in a limited release prior to being released through video on demand on October 11, 2016. (from Wikipedia)

Meeting by chance when they return to their tiny California hometown, two former high-school sweethearts reflect on their shared past. The film marked the Duplass Brothers’ first film under their four-picture deal with Netflix. Netflix financed the film without seeing a script, but just reading a 10-page outline of the story. This allowed for a true independent film experience.

The film had no script. The actors were given a summary of the movie and their characters and the rest was improvisation.

Blue Jay was the first feature film for director Alex Lehmann. He also served as the director of photography and cinematographer of the film.

The film was shot over the course of seven days in and around Crestline, California. It was filmed on a canon camera without built-in recording or built-in power source.

The film’s score was composed by Julian Wass.

One of my best friends recommended Blue Jay to me. I’ve said this before, at lyriquediscorde, but any and every movie she has ever recommended to me has ended up on my list of all-time favorite movies (if you want some recommendations by her, too, you should follow her movie Instagram – breewatchesmovies.

Here are some of my thoughts on the movie, written originally after seeing it for the first time.

Nostalgia has plot holes, but oh how I have such a soft spot for it. How many times have I thought about what it would be like to run into a past love, to have a day to spend together, to talk and re-connect, and share a moment again. Not just any past love, but one that mattered, one that had real significance. But, given that opportunity, is it not potentially loaded with emotional landmines that can, or most likely will, go off unexpectedly?

This movie hit very hard. I had a nostalgia reuniting situation a few years ago, and it was full of wonder and magic and passion – at first, but eventually all it had was a hell of a lot of landmines, and boy did they go off. Would I do it again? At one time I would have said yes, but now, where I am in my life, my answer is no. Would these two characters do it again? Yes, I think they would. I really do. 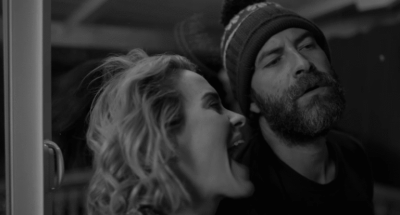 This film reminded me at times of the second installment in Richard Linklater/Ethan Hawke/Julie Delpy’s “Before” series, as well as Graham Greene’s book, “The End of the Affair”. The former because of the reconnecting of past lovers, and the day spent together, though to me “Blue Jay” had more hope and joy to it, even in the sad moments, than “Before Sunset” did. The latter (“The End of the Affair”) in the reveal that what you assume, and what you decide to say, is not always what you want, or mean. I do not want to spoil anything, but there is a moment where you see that things that happened, and things said, were not as true as they seemed at the time.

Sarah Paulson and Mark Duplass are two favorite actors of mine, and they were brilliant in this. They had chemistry and ease and emotional deft that brought these characters immediately to life for me, and also pulled my heart around for the entirety of their day/night together. I felt so much watching this film. I laughed, I cheered, I sang-a-long, I hurt, I cried — a lot, and I felt — a lot, too.

I think what hit me the most was how lost Amanda seemed to be, in her life, and in herself. Jim is lost, too, but he seemed more cognizant of it, more recently aware. But, I felt like it was all hitting Amanda. Maybe seeing Jim joggled some of that in her; the experience of hearing her voice on the tape, coming head-on with her younger self, as well as her first love. That resonated with me as I find myself wrestling with my own lost self, and traversing my way through it.

I loved the way these two connected to music in this, and how music played a part in their relationship, and their meeting up again moments. I love the black-and-white filming of it, the way it added to the starkness of winter in this small town, and the bleakness of being lost and being back home again. And, I loved both of these characters so much. When the movie ended I wanted so much more, but at the same time was good with where they left it.

The film plays out like a play. I’d actually love to see it performed on-stage, preferably with Mark and Sarah. I can’t imagine anyone else playing them.

The choice to have the movie shot in black-and-white was a brilliant one. I think it adds to the intimacy and almost too close look into these two people’s lives. It strips away the distraction of color and just focuses on these two characters – just as a play, in a small theater, with two actors on a stark and nearly empty stage would. 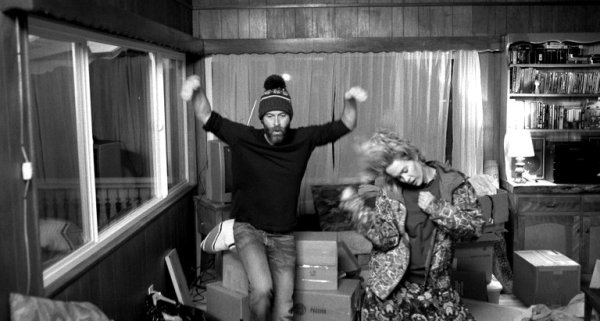 “No More I Love You’s” by Annie Lennox scene