8-Track Throwback is back again to celebrate the 8-Track Comeback, as well as the Bands and Music that were apart of the short-lived Music Format. I’m a big fan of 8-Tracks for so many reasons. For one, I love the hunt for these obsolete treasures. It is collecting with the added challenge of limited numbers out there, the age of the tapes, and condition. My boyfriend and I have been 8-Track collectors for almost a year now, and our favorites to find are Punk and New Wave titles.

This 8-Track Throwback feature is dedicated to two from the Punk/Mod category. I picked these 2 rare gems from our collection especially for this because today marks the 41 year anniversary of The Jam being signed to Polydor Records.

8-Track Throwback is brought to you by Lyriquediscorde and 8-Track Paradise.

The Jam was an English punk rock/mod revival band active during the late 1970’s and early 1980’s. They joined together in Woking, Surrey, U.K. They incorporated a number of mainstream 1960’s Rock and R&B influences, particularly from The Who, The Beatles, and from Motown Music. This set The Jam apart from most of their Punk Rock contemporaries and placed them at the forefront of a nascent Mod Revival movement.

Three titles were released on 8-Track of The Jam, In the City, This is the Modern World, and All Mod Cons. Two out of the three we’ve been able to hunt down. 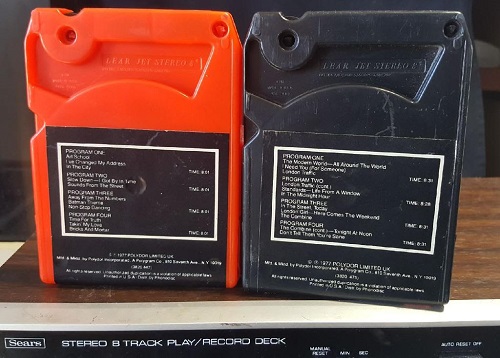 Both tapes are Lear Jet Stereo 8’s. This type of tape was designed by Richard Kraus, in 1963, while working under Bill Lear for his Lear Jet Corporation.

The major change to this new format was to incorporate a neoprene rubber and nylon pinch roller into the cartridge itself, rather than to make the pinch roller a part of the tape player, reducing mechanical complexity. Lear also eliminated some of the internal parts of the Eash cartridge, such as the tape-tensioning mechanism and an interlock that prevented tape spillage. By doubling the number of tracks from 4 to 8,  the recording length doubled to 80 minutes.

In 1964, Lear’s aircraft company constructed 100 demonstration Stereo 8 players for distribution to executives at RCA and the auto companies. (from Wikipedia)

THE TRACK LISTS ARE AS FOLLOWS: 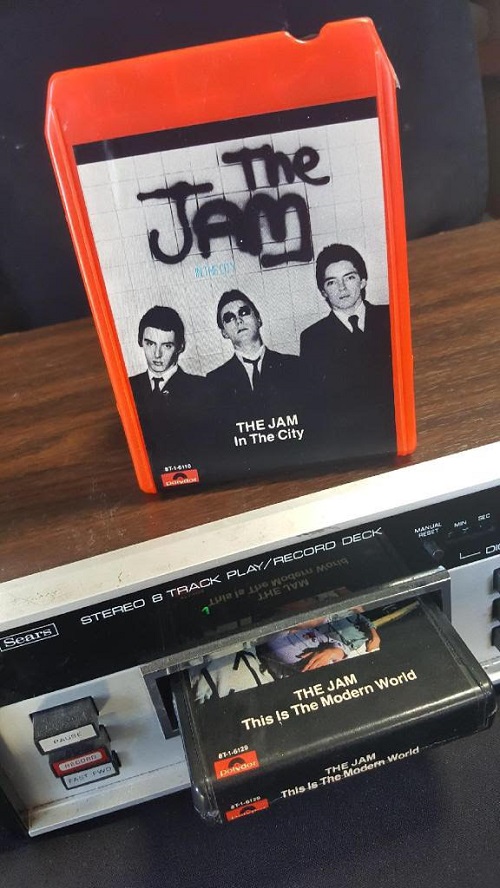 This is the Modern World:

Also, as with most of the other 8-Tracks we’ve Featured here, the Track Lists of both Tapes are in a different order. Finding an 8-Track that is in the Original Track Listing Format is definitely an exception to the rule. When we first started to collect 8-Tracks this switch in order bothered me, I must admit, but now I find the experience of listening in a new Song order a way to re-discover each Song with more attention. This is especially true with Albums I know so well that listening can become routine. The different order of Songs catches me off-guard and grabs my full listening attention.

Both tapes start with the same starting Song, but with after that, they both vary. And, unfortunately, This Is the Modern World has the dreaded split Songs. These are Songs that do not complete before the Tape changes Tracks. When this occurs you are stuck with a portion of a Song on one Track, then an abrupt change onto another Track where the other half of the Song resides.

We are always elated when there is no Song splits, like with In the City. 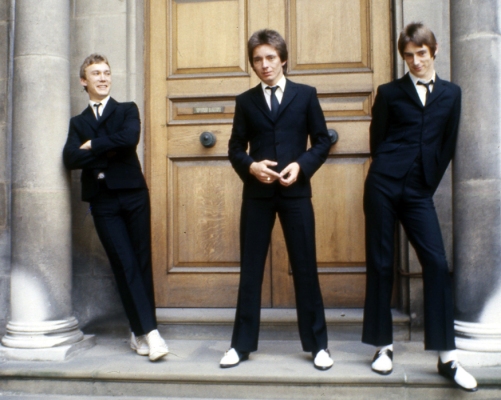 What are my Favorite Tracks on these two rare 8-Track Tapes by The Jam? For In the City it is the opening Track, “Art School”.

For, This is the Modern World it is the Song “Standards”.

Be sure to Tune In next week to see what’s up next from our ever-changing 8-Track Collection. While you wait you may want to start up a Collection of your own. 8-Track Paradise can help get you started.

A big Happy Anniversary to The Jam. You may be no longer, like 8-Tracks, but we love all the Songs just the same (if not just a wee bit more).

Maybe next week will be one of your Favorites Playing on the 8-Track Tape Deck. Be sure to come back and check it out.