I can’t take a road trip right now, but I can dream about one, and I can watch some of my favorite road trip movies, too. Me and my gypsy soul are definitely dreaming about them and making post-road-trips-to-take lists.

I’ve also put together a Top 10 list of my favorite Road Trip Movies – so for Today’s Movie of the Day, I’ll be sharing 10 Movies – my Top 10 Road Trip Movies. I’d love to hear about your favorites. Feel free to share them in the comments below.

I love that my list of favorite Road Trip Movies crosses movie-genres, and that the list includes great scenes and memorable songs, and soundtracks, too. Some of my favorite movies of all-time are on this list, which I suppose is not much of a surprise since I have such a soft spot/obsession with the road and road trips.

“This whole world’s wild at heart and weird on top.” – Lula

“I have to go home.” – William Miller

3. Away We Go (2009)
Written by Dave Eggers & Vendela Vida
Directed by Sam Mendes

“What if something happens to one of us and just makes us go crazy? I mean, what if I’m walking by a construction site and something falls, and them my frontal lobe gets chopped off and my personality’s altered and then I’m not a good dad? What happens then?” – Burt Farlander

“I had to come all the way from the highway and byways of Tallahassee, Florida to MotorCity, Detroit to find my true love. If you gave me a million years to ponder, I would never have guessed that true romance and Detroit would ever go together. And ’til this day, the events that followed all still seems like a distant dream. But the dream was real and was to change our lives forever. I kept asking Clarence why our world seemed to be collapsing and things seemed to be getting so shitty. And he’d say, “that’s the way it goes, but don’t forget, it goes the other way too.” That’s the way romance is… Usually, that’s the way it goes, but every once in a while, it goes the other way too.” – Alabama Worley

“I don’t remember ever feeling this awake.” – Thelma

7. Boys on the Side (1995)
Written by Don Roos
Directed by Herbert Ross 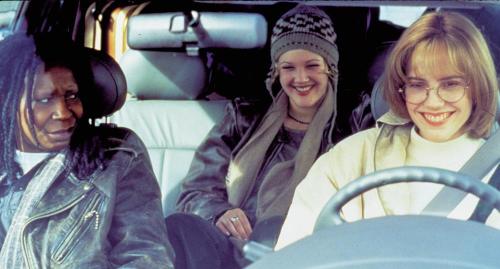 “No, we’re not taking drug money on the road with us. Put it back.” – Jane

“Well, it’s not like you can tell by looking at it.” – Holly

“OK, you have a point: we’ll just take half, all right? And we are not taking drugs on the road with us, either. So give them back.” – Jane

“Truth is cool but unattainable… the truth is totally amazing, but you can’t ever reach it.” – Julio

“Aren’t you going to give me a little credit?” – Ellie

“I proved once and for all that the limb is mightier than the thumb.” – Ellie

“Why didn’t you take off all your clothes? You could have stopped forty cars.” -Peter

“A real loser is someone who’s so afraid of not winning he doesn’t even try.” – Grandpa

Some runner ups…Seeking A Friend For The End Of The World, Zombieland, The Doom Generation, Jeepers Creepers, My Own Private Idaho, Crossroads, and Paris, Texas.