It’s the first Throwback Thursday of the year and to start us off we have Duran Duran’s “New Moon On Monday”, track two from the band’s 1983 album, Seven and the Ragged Tiger. This song was my first listen favorite when I first got the vinyl album. I was head over heels for the video, too. I mean really, how could I not be? The band in all their gorgeous glory running around France, starting within a play, and ending with the band as part of a fictional resistance, “La Luna”, running around the streets, racing on motorcycles, and waving torches of fire in the night.

In 1983, Duran Duran had me by the heartstrings. They had me by my everythings.

The song would remain a favorite of mine from the album, tied today with the last track, “The Seventh Stranger”. Even now, I can’t get enough of either song.

I’m also recently obsessed with the second to the last song – the instrumental track “Tiger Tiger”.

“New Moon On Monday” by Duran Duran
from the album, Seven and the Ragged Tiger (1983)
Throwback Thursday

“I said it again,
but could I please rephrase it?
Maybe I can catch a ride.
I couldn’t really put it much plainer,
but I’ll wait ’til you decide.
Send me your warning siren.
As if I could ever hide.
Last time La Luna.”

“New Moon On Monday” was released in early January 1984. It was the tenth single to be released by Duran Duran, the second from their 1983 album, Seven and the Ragged Tiger. It reached the Top 10 on both the British and American music charts.

The music video was directed by Brian Grant.

“We set out to make a little movie“, recalled Grant. “I’m not sure we succeeded.” He was not the first choice to shoot the video, as Russell Mulcahy, director of many of the band’s other videos, was unavailable.

Several versions of this video exist. The longest is a 17-minute “movie version” (see below) which includes an extended introduction before the song starts, and is set to an extended remix of the song. A shorter version, with a spoken French-dialogue intro, was originally submitted to MTV (see above), who then later requested an even shorter version without the prologue.

Yet another version was produced for the Dancing on the Valentine video collection, showing blue-lit scenes of the band members in front of a full-moon backdrop. All but one of the versions were included as easter eggs on the 2004 DVD compilation Greatest.

Both Andy Taylor and Nick Rhodes say this is the band’s least favorite video. “Everybody … hates it, particularly the dreadful scene at the end where we all dance together“, Taylor wrote in his memoirs. “Even today, I cringe and leave the room if anyone plays [it].” He recalls that they were miserable since their Christmas holiday had been cut short to shoot the video, and spent most of the day on the dark and cold set drinking, to the point that he was “half cut” by the time the last scenes were shot. “It’s one of the few times I’ve seen Nick dance“. (from Wikipedia)

In 1983-84, “New Moon On Monday” was one of my favorite music videos of Duran Duran’s. Watching it now, though, I can see how it could be some of the members least favorite, but it was those dreadful dance scenes that me and my fellow “Duranies” adored.

Nick does look terribly stiff, doesn’t he? I adored it at the time. To be honest, I still do.

My friends and I did wonder what was up with that kite Roger and Andy set free over France, and why did it seem to have lasers that shot out of it? Or was that supposed to be lightening adding to the lit torches in the night?

But mostly, to me, the story in the video had so much intrigue and drama within it. The French theatre reminiscent of the Moulin Rouge cabaret era of Paris, or should I say the Paris my 15-year-old self imagined out of my own crafted vampire stories – the ones rife with old theaters, stage make-up, dark alleys, and secrets traded in dark ends of the city, lit only by the night’s moonglow (that mysterious “La Luna”).

“Breaking away with the best of both worlds,
a smile that you can’t disguise.
Every minute I keep finding clues that you leave behind.
Save me from these reminders,
as if I’d forget tonight.
This time La Luna.”

I would watch the video and pretend I was the girl in black on the motorcycle who comes to take Simon off into the night’s escape, I wrote her in my mind as a spy who had been caught off-guard by her feelings for the one she was supposed to capture, falling in love in the midst of some kind of political uprising, falling in love with the perceived enemy (oh how attracted adolescent hearts are to unrequited, star-crossed love stories).

I also may have fashioned an entire outfit from that female spy at the start of the video.

I wish I still had the sweater, actually.

I wanted to hide in the alleys and run through the streets with the band so badly. It was a fantastic escapism dream that seemed so much more preferable to the sterile halls of parochial school, and the abusive home I came back to each day. I wanted to live an adventurous life, and I wanted to escape my own. 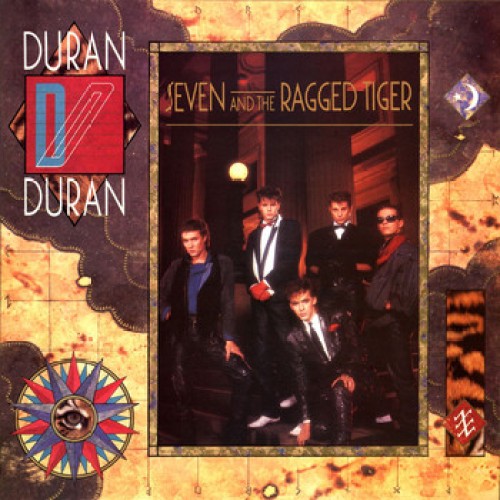 Seven and the Ragged Tiger came out right in the height of my Duran Duran frenzy. Though I would continue to be a fan for years to come, it would never be as crazy and obsessive and fantastic as it was that year. I wrote my first fan-fiction back then, stories penned that included the band and my friends and I traipsing around the world with them, and of course, falling in love with each other.

My friends and I had countless slumber parties which would be filled with endless watching of our VHS copies of their videos and live show, and the documentary, Sing Blue Silver (you can watch the entire thing on YouTube), that came out that year. We kept scrapbooks and photo albums filled with magazine clippings and carefully cut-out pictures from imported fan books from Japan and Australia and the United Kingdom. This was my first time falling hard for a band, and this was “my band” in so many ways. This was my first experience of being a real fan of something.

Birthday/Slumber party, my 16th, I think. My living room full of fellow-Duranies. New Moon on Monday was definitely played more than once.