I love discovering new music, new artists, new albums, and new songs. Today’s new discovery is also today’s Song of the Day – Lady Lamb, her album Even In The Tremor, and the title track, “Even In The Tremor”.

“We bathe in the Blood Moon in Berlin,
make-out in cathedrals,
Montreal to Madrid.
In Fallingwater,
brush our skin across the bed,
the Masaya Volcano paints our faces in red.” 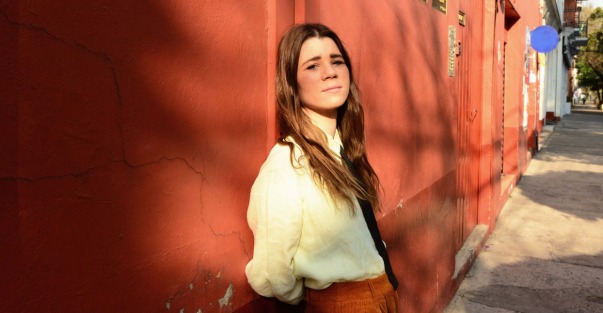 I’ve been asked before where I discover music – and the answers are always varied and evolving.

As a young girl, my music finds came from my mother’s record collection, the radio stations she chose to play in the car, and the stations I found on my transistor radio (often AM). I also delved into my grandparents’ and aunt’s music, when visiting my grandparents’ house – there’s was mostly country, along with some big band and rat pack sounds.

MTV came around when I was a teenager. The Music Television miracle came into my life around the same time that KROQ, the local radio station that introduced me to countless New Wave, Punk, and Goth bands and artists – so many from the UK. I devoured both, keeping composition books filled with songs and bands and singers I liked, as well as making stacks of mixtapes recorded off the radio. Discovering new music was an obsession, one that I shared with a lot of my friends.

Oh, and record stores. My love of record stores came from my mom. We used to go weekly together. I carried on the habit (addiction? obsession?) as I grew up. I worked in a few, too – Sam Goody and Tower Records.

One of my favorite record stores – Music Market in Costa Mesa – was tied with Tower Records as my preferred place to discover new music. They both played such great, unique, often new-to-me music in the store, and also had racks and racks of imports, and recommended albums, for me to peruse, and take a chance on.

Later they had CD sound booths, too – though, by then, I was working as a buyer at Tower, and knew what was in those before they were selected.

In the late ’90s, I found myself enrapt in the internet. Mailing Lists led to Music Communities and Blog platforms, like Livejournal, Diaryland, Blogger, and later WordPress. There was Social Media, too…MySpace, MOG, and to a lesser degree, Facebook. Sometimes I really miss the early internet, when people wrote more, were more involved in communities, and connected in a bigger way.

That said, I’m still here finding music and community and friends. I’m here, too, to help others discover new, and new-to-you music. I look to friends, other music-obsessors, and to my fantastic daughters (also music-obsessors) for recommendations of artists, bands, genres, albums, and songs.

Today’s Song of the Day – Lady Lamb’s “Even In The Tremor” – comes from my oldest daughter. I actually lifted it off of a recent playlist she made. A little familial music thievery on my part. I’m pretty sure she won’t mind.

Lady Lamb (Aly Spaltro) first began writing music in 2007 while working at a local video rental store in her hometown of Brunswick, Maine. She usually worked the closing shift which would lead to experimenting with and record music, afterwards, and well into the morning. The first Lady Lamb recordings were home recordings distributed in handmade packages to local Bullmoose Record Store, in Brunswick, Maine. (from Wikipedia)

“Even In The Tremor” is off of Lady Lamb’s 2019 album of the same name, released by Ba Da Bing!

“Even In The Tremor” (live) by Lady Lamb