These are the ghosts

As children, my sister and I would build indoor castles made of blankets and borrowed dining room chairs that we would back into each other. Tunnels were added with the TV trays our family received as a Christmas gift the year before, from relatives we rarely saw.

We’d share a flashlight Madeline would sneak out of “the forbidden zone”, also known as our stepfather’s tool chest. We’d pass it between us, taking turns, each telling our newest scary story. I always begged to go first, grasping the flashlight tight between her tiny fists. She’d point it at her face first, as her tale began, and then shoot it at different sides of the castle walls.

Madeline would follow. She liked to include shadowy figures she’d create on the inside blankets. She’d mimic them out with her left hand, while the right would shake the flashlight back-and-forth to create action and adventure. Sometimes I’d offer to hold the light, while Madeline directed me.

“This way, Alice,” Madeline would say, “and now there, right now, I’m almost at the big monster reveal.”

Sometimes we’d lie flat on our backs, the flashlight placed on the floor between our bodies, two sets of nearly identical feet stretched as far as space would allow, toes often poking a little outside of our suburban castle campsite.

The light and shadows cast would play in-between the crinkles and bends in the blankets. Madeline liked to point out the shapes, naming the ghostly clouds that danced over our heads.

Our parents were always out in the front room, usually with friends and with music playing loud, drunken laughter competing with their vinyl spun sounds. I used to try to incorporate the songs playing into my stories, ghost tales carved from Fleetwood Mac and Joni Mitchell lyrics.

Days later, Madeline would try to remember them all. Writing them down in dime-store composition books.

Maybe someday, she thought, we could be the scary sisters who turn stories into movies for more than just blanket castle nights.

“These Are The Ghosts” by The Bees
from the album, Free The Bees (2005)
Countdown to Halloween 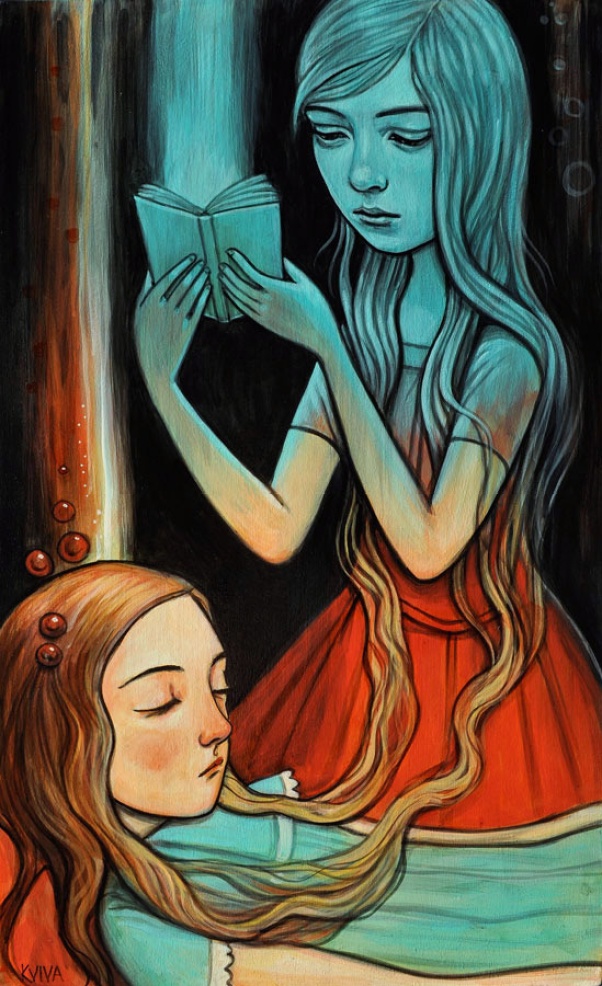 Happy October 2nd. This piece is a redo/revision of a memory of mine, fictionalized to be about two sisters with big imaginations, and a love of horror (and castles made of blankets and 1970’s TV trays). It is also inspired by the song “These Are The Ghosts”, by The Bees, and this hauntingly gorgeous piece entitled “Storybook” by another of my favorite artists, Kelly Vivanco.