Turn the page to the next category in Film Listography and we enter the comedy zone with Favorite comedies and their funniest moments. My number one choice had to be a Kevin Smith film – my all-time favorite Kevin Smith film – Chasing Amy.

Please note, most (not all) of the Movie Of the Day posts will have spoilers, this post included. Spoilers ahead – be warned.

“Since most of these people are cheering for the home team, I’m going to root for the visitors. I’m a big visitors fan. Especially the kind that makes coffee in the morning before they leave!” – Alyssa Jones

Alyssa Jones. The film’s “Amy”. I’ve always loved her. Her spirit, her fluidity, her sense of self, her persona, her humor, and her heart. When I first saw Chasing Amy in the ’90s I remember wishing I could be like her, seeing her as brave and bold in ways, and about things, that I was shy and insecure about.

I feel closer to her now then I did then. I was even once in a relationship much like the Alyssa’s with Holden, and have had to defend my past before, too – I think she’s such an important female character (is she the first bisexual female film character? I think so) – cheers to Kevin Smith for writing her, and for Joey Lauren Adams portrayal (and part of the inspiration) of her. 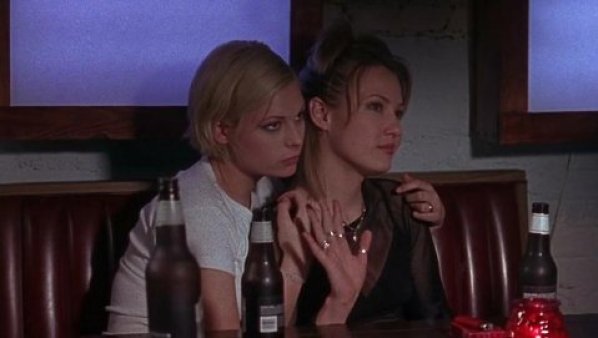 Alyssa is on my list of fictional characters I relate to the most. Not that I share all her experiences (some, but not all), but her way of living and loving, her take on things, and her reactions, I feel completely.

This is, and always will be, my favorite Kevin Smith film, one that makes me laugh, cry and feel (a lot).

There is something about this scene, the vulnerability in it, and that moment where you know that what is being opened up will change everything. It could have been terribly cheesy, but it is not, not even at all. To me it is believable, relatable, and painful in that way that when I first saw it I watched it through my fingers, with my hands covering my eyes, dreading what the outcome would be.

I think there is this universal feeling to it. That feeling of falling into an impossible situation, and having it burn you so deeply that you feel there is no way you can keep your feelings inside any longer, and that risk, that utter and complete risk, of telling someone you are in love with them in the face of rejection.

Beyond the scene above, there are so many other things I love about Chasing Amy. Alyssa is one of those characters that I relate to on an under the skin level, one of a few that I feel in a visceral way. I love how complex they wrote her friendship with Holden, and her own self-actualized journey, and reality. I love the friendship between Holden and Banky, as well, and the wit and pop culture peppered into a very real love story.

Like most of Kevin Smith’s films, the movie is hilarious, but also heartfelt. He has a knack for making you laugh until you fall over, and also FEEL in big capital letters.