The next Film Listography category is Unique Art House Films that I’ve seen. Art House and Indie tend to be my favorite type of movie, though I do have a big love for Classic Films, Horror, Teen, and Romantic movies, too. But indie and art house do tend to be the kind of movies that end up on my all-time favorite list.

Please note, most (not all) of the Movie Of the Day posts will have spoilers, this post included. Spoilers ahead – be warned.

The first two movies I’d list for this category I’ve already written about – Eternal Sunshine of the Spotless Mind and Lost In Translation. So, I’m going to skip to movie choice #3, Boyhood, for Today’s Movie of the Day.

“Because I don’t have all the answers.” – Mom

I saw Boyhood twice in the theater during the first two weeks of its release, once with my middle daughter and a group of friends that I worked with at Tower Records, back in the mid-to-late ’90s, and once with my oldest daughter, at our local art-house movie theater, the Laemmle Playhouse in Pasadena. 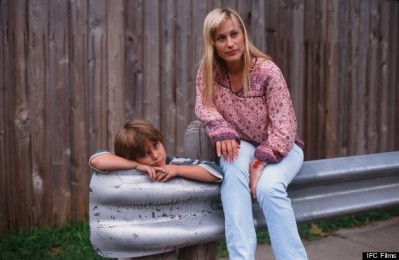 The movie overwhelmed me with awe and amazement, and it has lingered in my heart and mind since that first viewing. Patricia Arquette’s role really struck me and hit home, and though the film ends with her seeming so let down I feel that she was on the cusp of a new chapter in her life, that the sorrow was needed to mourn and move on, and that there was hope in those final moments for her, not just for what we see with Mason before the credits start to roll.

The Mom’s story in “Boyhood” feels so familiar, and hit on such painful memories, that it is hard to watch, but then again, it also makes me feel less alone in my story, and also proud of where I’ve come from, and gotten to. Patricia Arquette’s portrayal of the Mom (I wish she was given a name) was phenomenal, and just barely edged out my previous favorite role of hers (see #9). In many ways, I feel that this is more the Mom’s story, than the boys, but maybe that’s because of my perspective, as a Mom, who has shared some of the stories she has within the film.

“I’ve spent the first half of my life acquiring all this stuff and now I’ll spend the second half getting rid of it!” – Mom

All that said, I did enjoy the story of son and daughter, of siblings (both Mason and Samantha, and the two of them with their siblings by marriage they briefly have), and the story of estranged father and children. It’s just that the Mom’s story was so complex and emotional, and completely relevant, that I’m drawn to it, and stick to it, every time I watch the film.

The unique storytelling of Boyhood will forever move me, too. The fact that they came back, over time, with the same actors, to film and tell this story is immense and one-of-a-kind. Watching them all age, especially the parents, is so powerful to me, and so real and raw and true. It felt like witnessing the life of a real family.

And after all that time off-and-on together, they probably felt like one, too.

Sometimes, when I think of Boyhood, I imagine the “next”, and sometimes I’m just fine with the not knowing.