Another Movie of the Day from the Film Listography challenge starting this month, and on to yet another category – All-Time Favorite Foreign Movies. My number one choice is Betty Blue, a film I saw for the first time in 1986, and have loved ever since. It stars the stunning, and stunningly talented, Béatrice Dalle, who is intriguing and impulsive, and at times emotionally volatile.

Betty is another film character I’ve always related to.

I have recently returned to my memoir/novel/not sure which it will be which is set in the ’80s and ’90s. Paging through old paper journals and past memories has me nostalgic for both the music and the movies, from those two formative-to-my-life decades. I would love to spend a month, or so, re-watching my favorite films from the ’80s and ’90s, revisiting them, and seeing if they still impact me in the same way, and also see if/how they hold up.

“I had known Betty for a week. We screwed every night. The forecast was for storms.” – Zorg

For months I carried around the movie poster of Betty Blue in the back of my first car. A few times people thought she was me. We did share some style in clothes and hair at the time, but I’m not sure I quite see it beyond that. 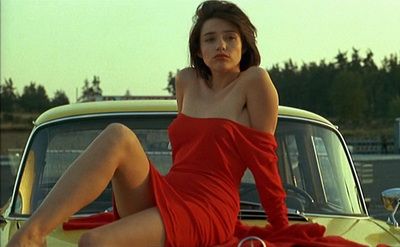 I do still have a red dress — just like the one in the above picture — hanging in my closet. My mother designed and sewed it for me back in the late ’80s. It was my favorite for years.

The film was directed by Jean-Jacques Beineix and stars Béatrice Dalle and Jean-Hugues Anglade. It is based on the 1985 novel of the same name by Philippe Djian. (from Wikipedia)

To me, Betty Blue is about love, dreams, and writing. It is about the precarious line between passion and madness, and it is about life itself – what fuels us, turns us on, delights us, inspires us, and drives us crazy? Can we hold on to a muse, or is it ever a fleeting thing?

I’ve never gotten over how incredible Béatrice Dalle is in this film. Just, wow.