Day 2 of June’s Song of the Day theme – Women in Music in the ’90s – features one of the most danceable, addictive, theatrical, feel-good songs from the ’90s, “It’s Oh So Quiet” by Björk. “It’s Oh So Quiet” is tied with “Army of Me” as my go-to Björk track, tied for favorite, a tune that will always put me in a better mood. Always.

The song is track 4 from Björk’s 1995 album, Post, her second solo release. Something new that I learned about the song today is that it’s a cover. I’d always assumed it was an original. But no, it was Betty Hutton who recorded and released the catchy tune in 1951 as the B-Side to her single, “Murder, He Says”. But that isn’t the original either. Betty’s is a version of a German song, “Und jetzt ist es still”, performed by Horst Winter in 1948, with music composed by the Austrian composer, Hans Lang, and lyrics by Erich Meder. The English lyrics were written by Bert Reisfeld. A French title, “Tout est tranquille”, was performed in 1949 by Ginette Garcin and the Jacques Hélian Orchestra. (from Wikipedia)

Damn, this song has made its way all over the world. I think it’s time to have a listen, don’t you think? Let’s start with Today’s Song of the Day, Björk’s 1995 version.

Listening to “It’s So Quiet” this early Sunday morning I immediately remember a local bar my friends and I used to go to, in the mid-90s, that had this very cool jukebox (oh how I love jukeboxes). This was one of my favorites to play. In fact, I’m pretty sure it was always part of my rotation when I slid my money in to pick a handful of songs.

It also reminds me of an apartment I had, my stereo in the living room, this song blasting out of the speakers while I danced around, bouncing up and down to the loud and soft (shhhh) intervals of “It’s Oh So Quiet”.

I’m getting that urge to dance around my living room right now, but I’m trying to “quiet” the desire and keep on writing. I mean, really, how can you not want to dance to this?

“It’s Oh So Quiet” became Björk’s biggest hit in the UK. It led to the Icelander’s subsequent single releases “Hyperballad” and “Possibly Maybe” also reaching the UK Top 20. Björk later virtually disowned the song by not including it on her 2002 greatest hits album. It is thought that Björk was disappointed that her most popular song is an unusual cover done in a style totally different to anything else she has recorded.

Björk was quoted as saying this about the song, in Record Collector, August 2002:

“It was sort of a joke really. It was a song Guy Sigsworth used to play on the bus when we were touring. Ever since I almost regret doing it because I wanted to put so much importance on making new music. So many people are doing old music and you’ve even got new bands doing old music. If I put something out in this world, it would be the courage to go ahead and invent things, so it’s ironic ‘It’s Oh So Quiet’ became my biggest song. The best bit was the video.” (from Björk.com)

The music video (see above) was directed by Spike Jonze and was inspired by musicals of the ’40s-’60s, notably the 1964 film The Umbrellas of Cherbourg. Björk was ill with a fever and could only speak in a whisper during the shoot. (from Songfacts)

Let’s have a listen to Betty Hutton’s 1951 version now:

What do you think? Björk’s version is definitely a loyal cover of the high energy, musical-style tune. 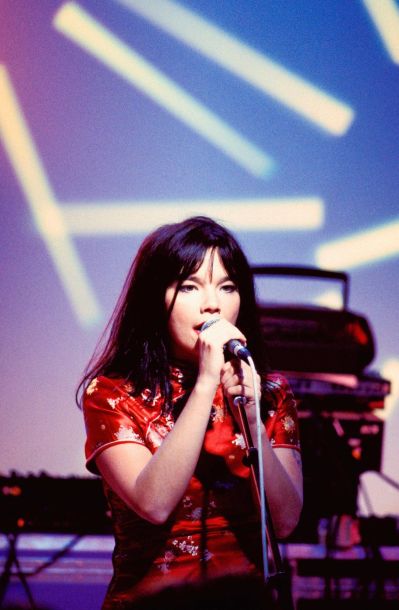 I hit play on Björk’s take on the song again, and I inhale those feelings of listening to it back in 1995. I was 26. I remember really feeling this song, singing it with that glow and shine that usually accompany that first falling for someone feeling.

I’m reminded, too, that this was the year I’d see Björk play live for the first time. She played it then. My friend and I danced around in the crowd, my head spinning in that drunk and a little delirious kind of way.

Do you have any specific memories attached to “It’s Oh So Quiet”?

Wait. I changed my mind. Let’s end instead with Björk performing the song live. Okay?