Track one of Nick Drake’s 1972 album, Pink Moon. The song is the title track, as well. For some people, it was their gateway track to Nick Drake thanks to a Volkswagen commercial circa 1999. I’d heard “Pink Moon” before the ad. I’d played the album as a kid. One of the many in my mother’s music collection that I’d lie on the living room floor and listen to. I will admit, though, that I’d forgotten all about Nick Drake and Pink Moon until I heard it again in that late 90’s commercial. I was definitely glad for the reminder and subsequently glad that other people were now taking notice of Nick Drake.

His music started to appear in movies after that: The Royal Tennenbaums, Garden State, and Serendipity, to name a few.

The song, Today’s Song of the Day, has made it into many a playlist, including this one from 2015.

“Pink Moon” was the first song I heard this morning. The song, along with my first cup of coffee, helped soothe the sting of Monday morning. After a wonderful weekend, and a lovely night with the man I love, I wasn’t ready to start the week yet, and I wasn’t ready to be apart from him yet, either. On the contrary, I wanted to crawl back in bed and cuddle up to that man I love and slow the morning down together.

“Saw it written and I saw it say,
pink moon is on its way.”

Though it is not my favorite Nick Drake, there’s no denying the magic this song holds. It was released two years before Drake’s untimely, young death at twenty-six. He overdosed on painkillers in his childhood bedroom. His life was mostly a mystery, with few things known of his personal life, or even his musical inspirations.

A fellow folk singer, Brian Cullman, had this to say of Drake when he witnessed him playing at the legendary London’s folk music venue, Les Cousins, in 1974. Drake took the stage right after Cullman performed:

“His shyness and awkwardness were almost transcendent. A tall man, his clothes—black corduroy jacket and pants, frayed white shirt—hung around him like bedclothes after a particularly bad night’s sleep. He sat on a small stool, hunched tight over a tiny Guild guitar, beginning songs and, halfway through, forgetting where he was and stumbling back to the start of that song, or beginning an entirely different song which he would then abandon mid-way through if he remembered the remainder of the first. He sang away from the microphone, mumbled and whispered, all with a sense of precariousness and doom. It was like being at the bedside of a dying man who wants to tell you a secret, but who keeps changing his mind at the last minute.”

It has been said, and speculated, that the lyrical content on the Pink Moon album told a sung-story of Drake’s battles with depression. That said, there have been other’s who negate this, including Cally Calloman of Bryter Music, which manages Drake’s estate:

“Nick was incapable of writing and recording while he was suffering from periods of depression. He was not depressed during the writing or recording of Pink Moon and was immensely proud of the album.”

The album differs from Drake’s previous albums as it was recorded without a backing band, featuring just Drake on vocals, acoustic guitar and a brief piano riff overdubbed onto the title track – today’s Song of the Day, “Pink Moon”. (from Wikipedia)

Sadly, none of Drake’s albums, including Pink Moon, were a success until many years after his passing. 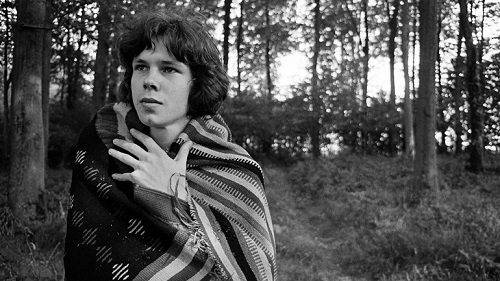 Many artists have covered Drake’s music, including “Pink Moon”, including Jeff Tweedy, of Wilco fame, live, in 2014 (see below):