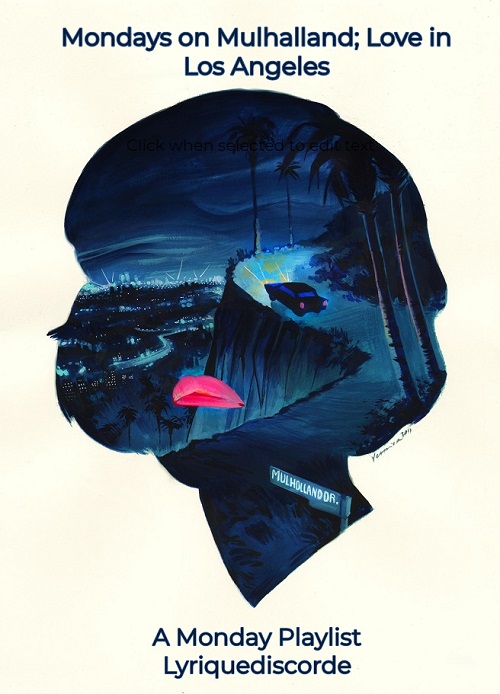 “Mulholland Queen” by Jonathan Wilson
“Electrolite” by R.E.M.
“Queen of the Underworld” by Jesse Malin
“California” by Josh Ritter
“Until You Come Along” by Golden Smog
“Echo Park” by Joseph Arthur
“Angeles” by Elliott Smith
“No Surprises” by Radiohead
“Girlfriend in a Coma” by The Smiths
“No Stars” by Rebekah Del Rio
“Tiny Vessels” by Death Cab For Cutie
“Lost Cause” by Beck
“Crying” by Roy Orbison
“Far, Far Away” by Wilco
“La Cienega Just Smiled” by Ryan Adams
“Time Spent in Los Angeles” by Dawes
“Lay Lady Lay” by Magnet
“California” by Mazzy Star
“Most of the Time” by Bob Dylan
“Los Angeles, I’m Yours” by The Decemberists
“Roses” by Pete Yorn
“I Wish I Was Sober” by Frightened Rabbit
“Free Fallin'” by Tom Petty
“Dogs of LA” by Liz Phair
“Carnival” by Natalie Merchant
“California” by Joni Mitchell
“Tiny Dancer” by Elton John
“Honey Don’t Think” by Grant Lee Buffalo
“Does He Love You?” by Rilo Kiley
“Concrete Sky” by Beth Orton