It’s Tuesday which means it’s time for another Weekly Top 10. This week I have another Artist request, this one coming from Musician and Lyriquediscorde Reader/Listener, John. He gave me a list of Artists/Bands he’d like to see a Top 10 of, and I picked Cat Power, aka Chan Marshall, for this Week’s List. Looking back, I did an artist spotlight on Cat Power that included a Top 10, but that was 3 years ago so it seems just about the right time to do a new one. Plus, it gives me an excuse to indulge in some Cat Power Albums, which is never, ever a bad thing. 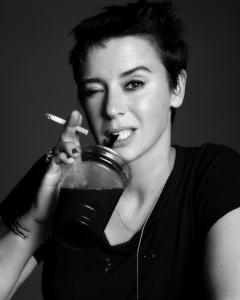 Cat Power (Chan Marshall) came into my life in the Autumn of 2003. She’d had a few albums by then, but they’d previously passed me by. I was sent a song of hers, Metal Heart, from a long distance friend who said he’d thought of me the second he’d heard it. I kept playing it, over and over and over and over, and over again. I was obsessed with it, the sadness, the heft of sound, the way it reminded me of The Velvet Underground and Hope Sandoval, and Patti Smith.

The next Song he sent my way was Cross Bones Style, and I fell just as hard for its haunting style and sound.

Those songs and Chan’s voice reminded me of New York City, not that I have any real memories of the city as  I’ve still never been there. But her Songs, well they made me remember a city I’d never been to. They play out as a Soundtrack to my dreams of being there, of how I would feel there. They Sing to my fantasy of how the city is to me.

Moon Pix was the first Album I acquired, and The Covers Record came next. I was entranced by Cat Power’s Covers. Yes, I’m always a sucker for a good cover, and there isn’t a single miss on the Album. But, some of these Songs were more than that to me. They transcended the originals, they became something of their own. “Wild Is the Wind”, “I Found a Reason” and “Sea of Love” found their way into my heart, and into love letters delivered in the shape of mixed CD’s that I sent off to a poet I once so deeply loved.

What are your Favorite Cat Power Songs? Here’s Mine: