Gold is Ryan Adams’ 2nd studio album, released in September of 2001 on Lost Highway Records. The album remains Adams’ best-selling album, certified gold in the UK, and has sold over 364,000 copies in the U.S., and 812,000 plus worldwide. The album is a modern classic, which is what part of Ryan Adams’ goal.

Ryan stated about the album:

“with Gold, I was trying to prove something to myself. I wanted to invent a modern classic.”

Ryan Adams intended for the album to be a double album, but his record label disagreed and condensed the album into a single-disc.

“[the label] took the last five songs, made it a bonus disc and put it on the first hundred and fifty thousand copies. Fucking my fans over and making them pay extra for a record I wanted to be a double album. They counted that as one record.”

This bonus disc is known as Side Four; the disc’s title reflects the fact that the bonus material makes up the fourth side of the double LP edition of the album.

The album includes “When the Stars Go Blue”, which has been covered by artists such as The Corrs and Bono, Tyler Hilton, Bethany Joy Galeotti, and Tim McGraw.

“The Rescue Blues” was featured in the end credits of the 2001 film Behind Enemy Lines.

I was in Michigan in the middle of a deadline at work when I first heard Ryan Adams’ music. A friend and fellow music obsessive shared 2 songs with me – both of them from Gold. The songs were “Harder Now That It’s Over” and “Sylvia Plath”. I remember playing both songs over and over and over that day, the melancholic melodies of both soothing my overtired and overwhelmed psyche.

Afterwards, when the deadline had been met and my nerves had settled, I recall doing an excited search via one of those “music sharing sites” of the early aughts trying to find MORE. That weekend I went out and bought Gold, on CD, and that was the real start of my love of Ryan Adams’ music.

Gold was my gateway drug.

Years later I would stand in a record store in Manchester, England, and buy a second copy of Gold on CD, along with a copy of Heartbreaker. I lingered at the counter for awhile discussing Ryan’s music with the girl working that afternoon. We got to the inevitable question of a favorite album, and she said Gold.

Later that evening I stood in a pub with coins in my hand, feeding a jukebox, and choosing “La Cienega Just Smiled”, from Gold. I was far from La Cienega. I was far from home. But, Ryan was playing and it made the world seem to shrink, and intersect, connecting me in a way that only music ever can. 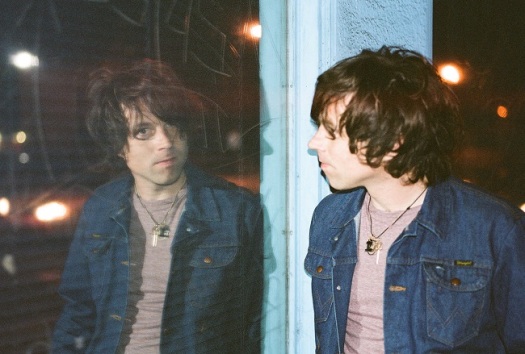 “And I hold you close in the back of my mind,
feels so good but damn it makes me hurt,
and I’m too scared to know how I feel about you now,
La Cienega just smiles…”see ya around”“

“I thought maybe I could be some kind of shelter,
but oh, your storm how it raged.
You know your kisses they like lightnin’ and thunder,
and your smile is sweet and come down like rain.”

“And, maybe she’d take me to France.
Or maybe to Spain,
she’d ask me to dance,
in a mansion on the top of a hill.
She’d ash on the carpets,
and slip me a pill,
then she’d get me pretty loaded on gin.
And, maybe she’d give me a bath.
How I wish I had a Sylvia Plath.”

“Moonlight on the beach,
sweet amphetamines –
It’s only gonna make you love me more.”

We hope you enjoyed this week’s Quintessential Album choice, Ryan Adams’ Gold. Feel free to share your thoughts – we would love to read them.