Wednesday’s Top Music Obsessions of the Day Features 5 Songs selected to take us all over the hump of mid-week with Songs to sing. These 5 Best Songs for a Wednesday are a combination of Classics and Covers, all lined up and ready to be Turned Up Loud and Sung-A-Long to. Are you ready to hear what these Top 5 have in store?

Song 1 is a Classic Bowie Song that really requires you to Turn Up the Volume. Next up is a Bowie Cover, an unexpected New Wave take on a Quintessential Bowie Tune. Song 3 is a Top Beatles Track, followed up with an Interesting Cover of “Happiness is a Warm Gun”, by The Breeders. The Mamas & The Papas leave us with some “California Dreamin'” to end Today’s Top 5 with. Seems perfect for a late June day, don’t you think?

We are halfway to the weekend on Wednesday, and this Top 5 Music Obsessions of the Day Playlist is just what we need to get over and on with it. You may want to Press Play multiple times on these 5 Tracks. And, if you want to, you can return to past days-of-the-week Top 5’s by clicking on the Links above. Each Day’s Songs are added to the Spotify and YouTube Playlists, compiled with Love and Music Obsession, for your Listening, and Music Obsessing Pleasure. 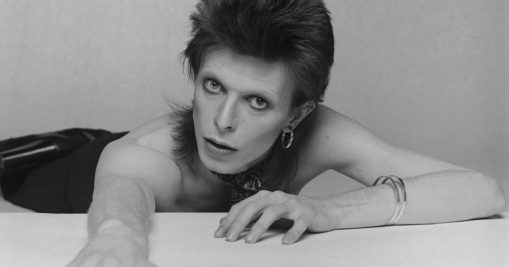 Quintessential Bowie that is such a Sing-A-Long Classic, and near impossible not to Dance to. The Song was recorded in February, of 1972, towards the close of the Ziggy Stardust Sessions. It Features a piano riff heavily influenced by Little Richard, a “Lyrical reference” to the Book and Film “A Clockwork Orange” (the word “droogie”, meaning “friend”), and the Sing-A-Long (or Scream-A-Long) hook, quoted above (“what bam, thank you, ma’am”).

The Song was originally offered to the Band Mott The Hoople, by Bowie, if they agreed to not break-up. The Group refused, but Recorded Bowie’s Song, “All the Young Dudes”, instead.

A unique take on Bowie’s “Fame”, the Eurythmics put a New Wave spin on the Song, with Annie Lennox’s Voice painting a new story as the Song unfolds. There seems to be more hope, and less vitiriol, in this Version.

The Original, Bowie described years after writing it, came off “nasty, angry”, and he fully admitted that it was written “with a degree of malice” aimed at the Mainman Management Group with whom he had been working at the time.

“He say I know you,
you know me.
One thing I can tell you is you got to be free.”

Turn this one Up. Loud.

The Song was written by John Lennon and is said that it was written as a campaign Song for Timothy Leary, who was running for California Governor at the time of its release.

It’s also been suggested that each verse talks about one of the members of The Beatles or a self-portrait of Lennon himself. However by his own admission Lennon often simply filled his lyrics with non-sequiturs.

A Stellar Cover Version, that amps up the edge to the Song even further than the original. The fuzz and the bass really take it to a new level.

This Song always feels like a Summer Song, but it is clearly the opposite. Still, there is a Dreamy, Summery feel to it, like the Beach in the afternoon, driving up the Coast with the windows rolled down.

The Song is said to have become a signpost of the “California Myth” and the arrival of the nascent counterculture era.

We hope you enjoy this Soak Up the Sounds on this Wednesday Edition of the Top 5 Music Obsessions of the Day. We hope you Press Play and Turn Up these Tunes from David Bowie, Eurythmics, The Beatles, The Breeders, and The Mamas & The Papas – and Enjoy!

BE SURE TO TUNE IN TOMORROW FOR ANOTHER TOP 5 MUSIC OBSESSION OF THE DAY. YOU WON’T WANT TO MISS IT!