Thursday’s Top 5 Music Obsessions of the Day is filled with Songs that dip into the Mellow side of Indie. All together they breeze in with a Melodic soft touch that fit perfectly into this “Friday Eve”. Some of the Tracks have a bit of Twang to them, others have the definitive Indie Pop signature to their Sound. Why don’t you Press Play and have a Listen?

Song 1 is from Slowdive’s Self-Titled Album, a Song called “Star Roving”. Next up is “Love Like Ghosts” from Lord Huron, a Band whose recent inclusion in the Netflix Original Series, 13 Reasons Why, has put them on many a Listeners radar. “Just Make It Stop”, by Low, comes in at # 3, which is the perfect transition to Neko Case’s “Look For Me (I’ll Be Around)”. Neko’s Indie-Twang carries over to Stephen Malkmus & The Jicks’ own Sound, with the Last Song of Today’s Top 5, “Lariat”.

Here’s to a Mellow Melodic Thursday Top 5 that will keep us floating on into Friday. Even though this Mix is on the Softer Side, you should still Turn the Volume Up on this Top 5, and don’t worry if you missed a day of Music this week,  you can always catch-up throughout the week through those Links above. Each Day’s Songs are added to the Spotify and YouTube Playlists for the Week, put together with Care and Music Obsession, for your Listening, and Music Obsessing, Pleasure. 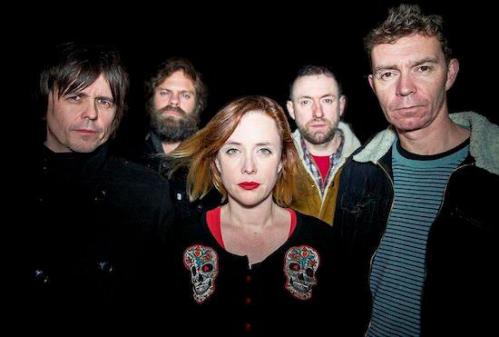 “Smiling beautiful.
She says I make it best,
for everyone to hide.”

Slowdive’s Music is ever a Mood-Chill choice for me, and has been ever since I discovered them back in the early 90’s. This is a Track off their 2017 Album that is very well worth a Listen (many Listens), if you haven’t checked it out yet. The Album was reviewed here at lyriqudiscorde last month.

“Spirits follow everywhere I go.
Oh they sing all day,
and they haunt me in the night.”

This Song is a Perfect Companion Track to Lord Huron’s “The Night We Met”, the Song that was prominently Featured in the Netflix Original Series, 13 Reasons Why. They have not just a similar sound, but also they are Lyrically linked in this Haunted by Love, and the Ghost of Love, kind of way. They are not Played back-to-back in this list, but take a Listen that way, I think you will “Hear” what I mean.

One of the Best Songs off of Low’s 2013 Album, The Invisible Way. It exudes such a quiet desperation for wanting to get over lost Love. Or it could also be taken as an Ode to trying to heal from one’s own issues, whatever they may be, but not being able to overcome them. The Song is so Beautifully Heartbreaking.

“When the new crowd,
starts to bore you,
just remember –
there is someone to adore you.
When you’re weary of,
nights up on the town –
Look for me.”

Press Play and close your eyes. For me, when I do that I picture a David Lynch type bar somewhere, smokey, half-empty, dark even in the daytime. Neko is up on a small, raised Stage singing, or maybe this Song is swirling out of a Jukebox. After drinking one Whiskey too many, this Song is a buoy to keep you afloat, a Musical tether to hang on to.

“You’re not what you aren’t.
You aren’t what you’re not.
You got what you want,
you want what you got.
People look great when they shave.
Don’t they?”

The most Upbeat of the Top 5 Music Obsessions Today. This one is a Kick to drive to, with the Volume Turned Way Up.

So, there it goes and there we have it – This Week’s Mellow “Friday Eve” Thursday Mix of Top 5 Music Obsessions of the Day, Featuring Slowdive, Lord Huron, Low, Neko Case, and Stephen Malkmus & The Jicks. Hope everyone Pressed Play and Turned that Volume Way Up, and Enjoyed Today’s Top 5 Songs.

Did you have a Favorite Track?

What Song, or Songs, are you Musically Obsessed with Today?