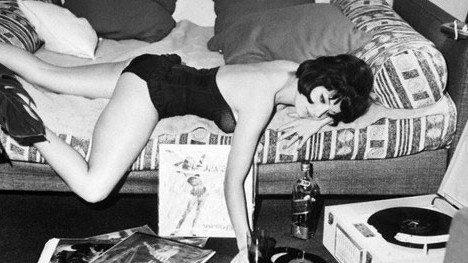 Today’s My Top 5 Music Obsessions of the Day’s music begins with a mellow track by Fionn Regen, a newer discovery of mind, both artist and song. The mellow-Monday-mood continues with one of my favorite tracks by M. Ward (pictured above), which I believe was the first track I ever heard from him, back in 2006. “Anthems for a Seventeen Year Old Girl” is up next, a song that I used to throw on when I worked at Tower Records, in Chicago, and much like that quintessential scene in the movie High Fidelity, it would always sell before the second verse began. Stripped down piano version to Sia’s “Chandelier” is up next, keeping with this Monday’s mood. Tying it all together is my favorite Stereophonics track, one that always makes me want to drive to the ocean, windows down, cares blowing away, with the volume turned up.

My Top 5 Music Obsessions of the Day

“I have become an aerial view,
of a coastal town,
that you once knew.”

Somewhat newly discovered Fionn Regan hit my ears via a Spotify Discovery playlist. I love the melodies at the chorus, and the guitar. I see that Fionn was signed to former Cocteau Twins member’s dream pop label, Bella Union, in the UK and alt-country’s favorite label, Lost Highway. I can see this song as a halfway mark between dream pop and alt-country (veering a bit more to the latter). I will definitely be having a listen to more of his music.

“And I said,
what do you do with the pieces of a broken heart?
And, how can a man like me remain in the light?
And, if life is really as short as they say,
then why is the night so long?”

Something about this song makes me think of long nights, the kind that hit in Summertime, those longest days ever kind of days. It reminds me of warm evenings, the kind that feel so good when you sit outside, talking, laughing, soaking in the stars in the sky and the passing of minutes into hours, into late, late middle of the night. Contemplative lyrics full of questions that have a layer of hope embedded inside them.

“Used to be one of,
the rotten ones,
and I liked you for that.”

I always loved that lyric. It evokes young/first love, the kind that sometimes is terribly misguided, a heart drawn to the ones who will eventually hurt, disappear, or simply be nothing more than unrequited wishing.

“But I’m holding on for dear life,
won’t look down,
won’t open my eyes.”

I love this version of “Chandelier” because I think it fits the melancholic desperation of the lyrics, making them hit like a punch with each line.

My favorite Stereophonics song, as I mentioned before. A must-be-included song on any road trip playlist I make. Also, turn this one up, way up, it sort of is mandatory that you do.

So that was Monday’s Top 5 Music Obsessions of the day. What are you starting your week listening to?