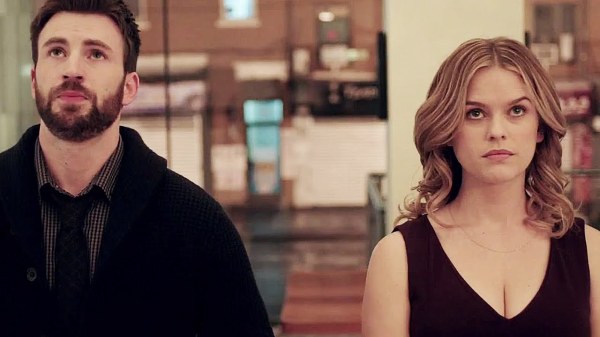 It’s been done before. It’s been done better before. But, all that said, I enjoyed this go at the one-night love story. It’s one of my go-to’s, one of my favorite kind of storytelling on-film, the all in one-night adventure that involves mishaps and intimacies, and lots of conversation. I may be biased because I love the genre, the type of storytelling, and I’m also quite fond of Chris Evans, so with that big disclaimer I have to say I really enjoyed this film.

There were these moments between Brooke and Nick, often unspoken, that brought these two to life for me, and also established an undeniable chemistry. I believed in their story, and in their attraction. I silently (well, perhaps not so silently, I am known to talk to movies) rooted for them, and hoped that the open-ended ending led was just that – hopeful. 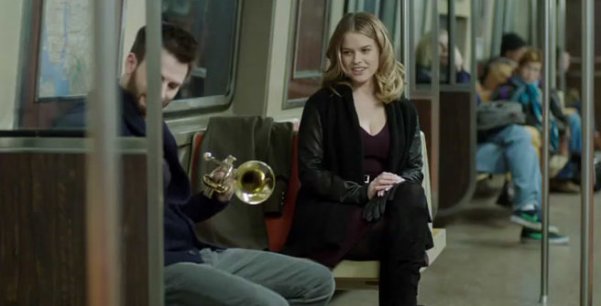 There were some details that nagged at me. I was not so keen on Brooke’s desire to return home to a man who had not just cheated, but had kept an emotional and physical affair going for what seemed like a considerable amount of time. I wanted to see her have a moment of self-worth hit, and not necessarily wind up with anyone, but walk off on her own (with maybe a glimmer of someday with Nick – I am a romantic at heart).

Favorite moments involved walking around New York, writing on the back of the hotel paintings (I didn’t know that was a thing, and now I’m so curious a) if it is, and b) if I can catch some of this “found art” the next time I’m in a hotel) and the pay phone/time travel conversations. That latter reminded me of a scene in Before Sunrise, when Celine and Jesse make phone calls explaining meeting each other, while with each other in a restaurant.

Part of me wanted to see Nick’s audition. For a bit in the movie I thought perhaps he’d made the audition up, but after awhile it was solidified that it was real. And another part of me wanted to see Brooke get off the train and not go back to her husband, or back to Nick immediately either. I wanted her to find her own “music” (or whatever gave her bliss).

Also, I cannot neglect to mention that the soundtrack was so lovely, and fit the feel, the mood, the lighting and the cinematography perfectly. I especially got excited when I heard Phosphorescent’s Song for Zula, a song I’ve been obsessing over lately.

All in all, I really did enjoy this one. It was the perfect movie for a Saturday spent packing boxes and fighting a bad flu, and desperately needing a break. It was just perfect for me – just what I needed.