List your favorite comedies and their funniest moments :: FilmListography 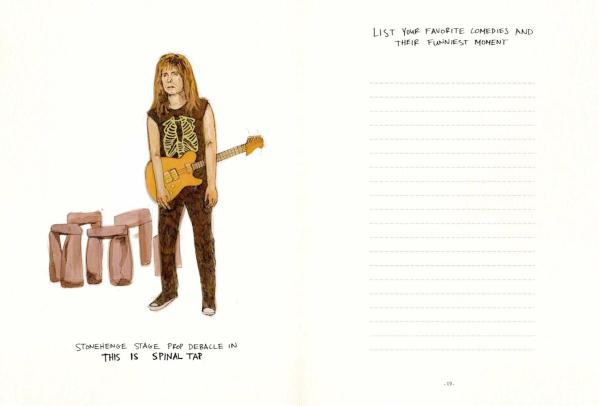 List your favorite comedies and their funniest moments
courtesy of Film Listography : Your Life In (Play)Lists

Funny thing, in trying to compose this list I am realizing that comedy is not a favorite film genre of mine, so much so that I do not have many to put on a list like this. I’ve been stumped on this page of my Film Listography book for months now, and every time I come back to it I feel like my mind draws a giant blank. I do enjoy funny things. I love when people can make me laugh. I even enjoy stand-up comedy. But, comedy movies are a tough one for me.

I do like romantic comedies, even the cheesy ones. I like indie comedies, too, which will most likely be what this list is made up of. But, I’m not a fan of gross-out comedies, I’m not big on satire/parody, and I’m not one for drug comedies, and especially not the misogynistic heavy comedies that seem to make their rounds more often than not. All that said, I’m going to give it a shot – though I predict the list will not be as long as other categories I’ve done/will do from this book.

Please note – I am not including romantic comedies, as they will (hopefully) be a category of their own. Well, with three exceptions, as there are three films below that could be considered romantic comedies, but they make me laugh so much I had to include them. 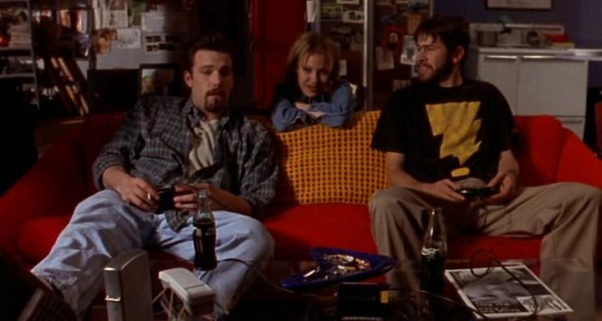 “Now *that*, my friend, is a shared moment.” ~ Banky Edwards

Funniest moment: There are many, but I’m partial to the “Jaws” type conversation/competition that Alyssa and Banky have at the bar.

“I don’t want to talk to you no more, you empty-headed animal food trough wiper! I fart in your general direction! Your mother was a hamster and your father smelt of elderberries!” ~ French Soldier

Funniest moment: Though this could be construed as satire/parody, this is a movie I grew up with – my family often quoting bits of it, and cracking each other up. So many funny moments, but I particularly love the moment pictured above, with the persistent knight willing to keep fighting sans limbs. 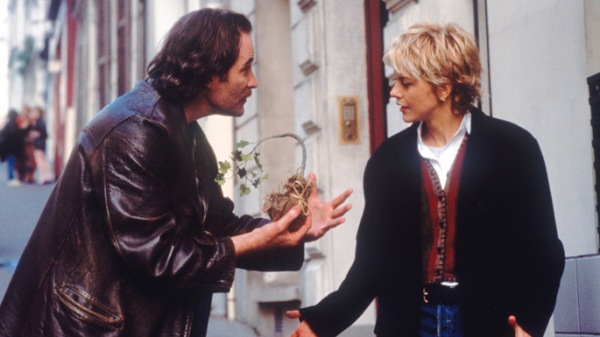 “You’ll become one of those hunchbacked, lonely old men, sitting in the corner of a crowded cafe, mumbling to yourself, “My ass is twitching. You people make my ass twitch.” ~ Kate

Funniest moment: Yes, its a romantic comedy, but it has to be on this list because it makes me laugh so much. It is near impossible to pick my favorite/funniest moment, but for today I’ll say when Kate and Luc are talking in the car and they are talking about Bob Dylan. 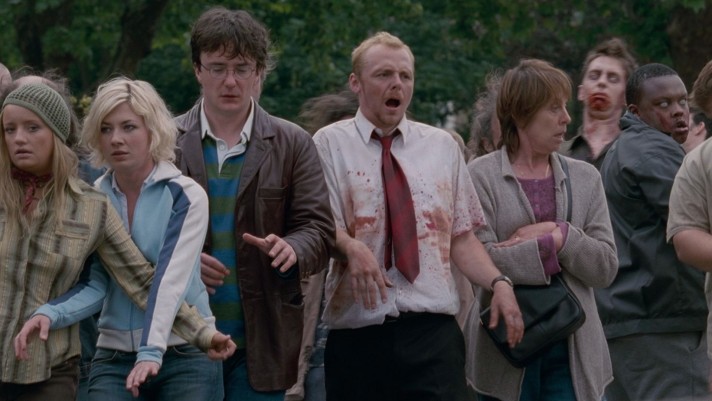 Funniest moment: So many! Too many! Maybe when they are walking like zombies (see above) and Shaun’s Mum just walks normal. Or the throwing the records scene. Or the fight sequence to Queen in the pub. SO MANY. 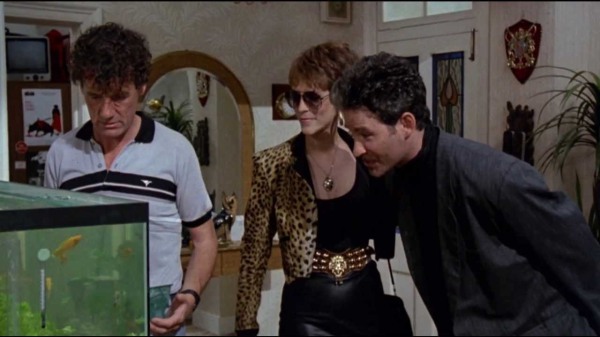 Funniest moment: So many funny moments. I saw this in the theater and left hurting from so much laughter. Otto cracks me up the most (yes, I have a Kevin Kline thing), especially with the fish and Ken – that scene.

6. Death at a Funeral (2007)
Written by Dean Craig
Directed by Frank Oz

Funniest moment: Without a doubt, the scenes with Simon in them. High. Hallucinating. All his expressions, and antics. Alan Tudyk is hilarious in this film.

“Ladies and gentlemen, this tall drink of water headed my way is a pillar of the shopping community who informed me earlier today of a nefarious plan of his to screw my girlfriend in an extremely uncomfortable place.” ~ Broadie

“What… like the back of a Volkswagen?” ~ Gil Hicks

Funniest moment: So many. Anything Broadie. I’m a Jason Lee girl.

“Let me explain something to you. Um, I am not “Mr. Lebowski”. You’re Mr. Lebowski. I’m the Dude. So that’s what you call me. You know, that or, uh, His Dudeness, or uh, Duder, or El Duderino if you’re not into the whole brevity thing.” ~ The Dude

Funniest moment: Too many to list. Today, thinking on it, it would be the whole “tied the room together” (re: the rug) or the Dude’s distaste of The Eagles. 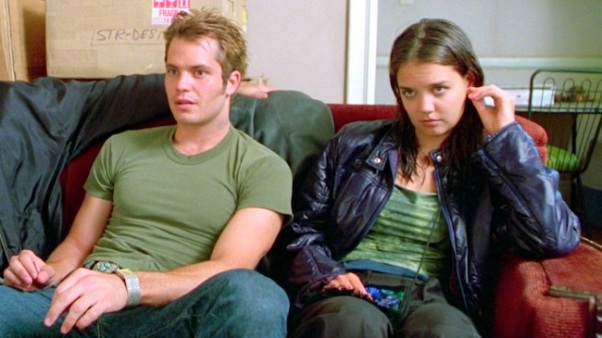 “So, what do you have against The Family Circus?” ~ Claire

“Okay. You sit down and read your paper, and you’re enjoying your entire two-page comics spread. Right? And then there’s the Family fucking Circus, bottom right-hand corner, just waiting to suck.” ~ Todd

“Your parents are probably wondering where you are.” ~ Vanessa

“Nah… I mean, I’m already pregnant, so what other kind of shenanigans could I get into?” ~ Juno

Funniest moment: Though this movie gets to me in the soft spots, more than the humor, I do find Juno’s conversations with her best friend the funniest (though on the feeling side, her and her father’s conversations are my favorite in the entire film).

“I loathe the bus. There has to be a more dignified mode of transportation.” ~ Samantha

Funniest moment: The bus. Also, Sam and her Grandparents. 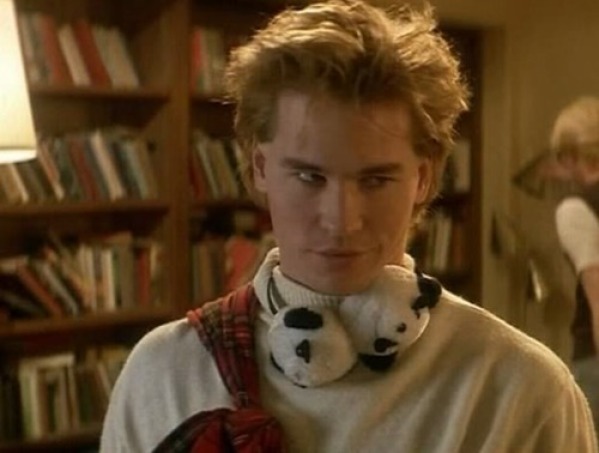 “Self-realization. I was thinking of the immortal words of Socrates, who said, “… I drank what?” ~ Chris

Funniest moment: Too many. I like the studying scene a lot. But there’s so many funny moments. I need to re-watch as its been too long. 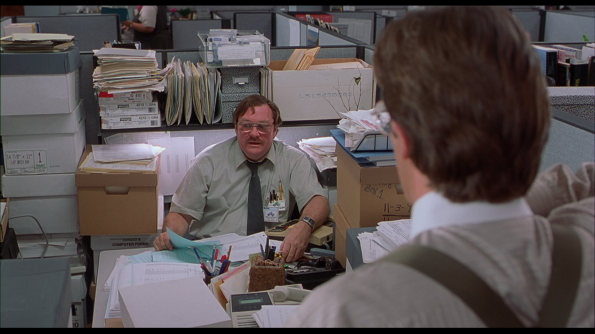 “And I said, I don’t care if they lay me off either, because I told, I told Bill that if they move my desk one more time, then, then I’m, I’m quitting, I’m going to quit. And, and I told Don too, because they’ve moved my desk four times already this year, and I used to be over by the window, and I could see the squirrels, and they were merry, but then, they switched from the Swingline to the Boston stapler, but I kept my Swingline stapler because it didn’t bind up as much, and I kept the staples for the Swingline stapler and it’s not okay because if they take my stapler then I’ll set the building on fire…” ~ Milton

Funniest moment: I love the jump to conclusions mat and the violence against the fax machine (or is it a printer), but Milton is by far the funniest to me.

“Strange things are afoot at the Circle-K.” ~ Ted

Funniest moment: Carlin’s scenes, and I’m very fond of Joan of Ark in this. So many funny parts. 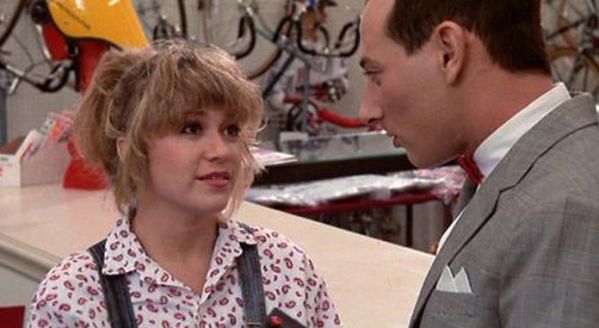 Funniest moment: Large Marge, the Alamo and all scenes with Dottie.

“Mother, do you remember when I was little, I had a friend, he was make-believe?” ~ Elizabeth

“Don’t you remember? Only I could see him?” ~ Elizabeth

18. Bring It On (2000)
Written by Jessica Bendinger
Directed by Peyton Reed

“I don’t know what’s scarier, neurotic cheerleaders or the pressure to win. I could make a killing selling something like Diet Prozac.” ~ Missy

“Go ahead, make my millennium.” ~ Beetlejuice

Funniest moment:Waiting room of purgatory, and anything with Lydia in it.

“I should do something very extroverted and vengeful to you. Honestly, I’m too tired. So, I think I’ll transfer you to the undergrowth department, brackens, more shrubs, that sort of thing… with a 19% cut in salary, backdated to the beginning of time.” ~ Supreme Being

2 thoughts on “List your favorite comedies and their funniest moments :: FilmListography”