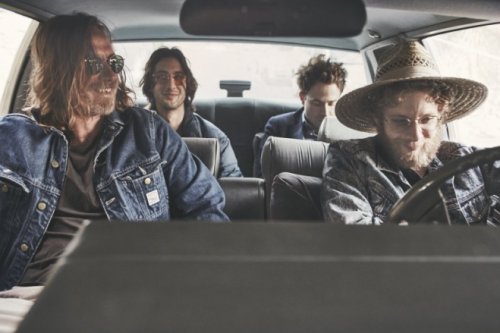 Tomorrow night I am going to be seeing Dawes perform live for the first time at the Hollywood Forever cemetery, inside the Masonic Lodge. As I listen to their past three albums, and the first two tracks from their upcoming one, I am realizing just how much their music means to me. So many of their songs have made their way into a variety of playlists over the last few years, as well as played muse to my writing more times than I can count. Two songs in particular, Time Spent in Los Angeles, and A Little Bit of Everything, were integral parts of big decisions I made in my life in terms of where I chose to call home (at least for now), and more consequential, where my heart chose to belong to.

Though decisions may change, and love sometimes fades, music is a constant in my life, and once an artist, or band, becomes one of my favorites, well, that distinction sticks and stays.

I happened on Dawes music accidentally, hearing the song Time Spent in Los Angeles on a Pandora music station. I’ve always been a sucker for songs and stories about LA, especially ones that contain a certain mix of love and jadedness within them, because that is the blend of feelings about the city that I have after spending much of my life in, and around, the so-called “City of Angels”. Time Spent gets it in that right way that I love, and it became a fast favorite of mine. Soon after I sought out the album the song is from, Nothing is Wrong, which would be my first, full-fledged introduction to Dawes. The album stole my heart, and remains my favorite (so far) of theirs.

Dawes’ music has that tremendous sense of story-telling that almost always wins my musical heart. The songs become more to me with each listen, and I find myself growing attached to new songs with each new album play. I love when that happens. It is in those moments that I know an artist, or band, has become one of my forever favorites. 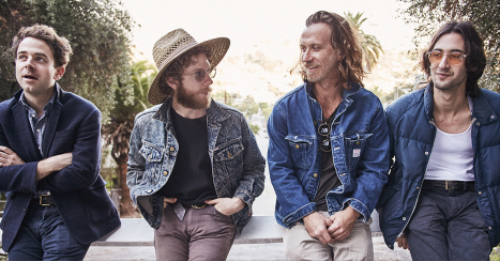 Dawes is originally from Los Angeles, California, my hometown. Dawes is composed of brothers Taylor (guitars and vocals) and Griffin Goldsmith (drums), along with Wylie Gelber (bass) and Tay Strathairn (keyboards).

Dawes was formed from the band Simon Dawes after the departure of co-songwriter Blake Mills,subsequently abandoning a post-punk sound in favor of folk rock. Dawes has been described as having a Laurel Canyon sound derived from artists such as Crosby, Stills, and Nash, Joni Mitchell and Neil Young.

At the invitation of producer Jonathan Wilson, the band joined a local informal jam session that included Conor Oberst, The Black Crowes’s Chris Robinson, and Benmont Tench. The band recorded their debut album, North Hills, in Laurel Canyon in a live setting to analog tape, resulting in a sound that Rolling Stone magazine called “authentically vintage“. Wilco multi-instrumentalist Pat Sansone is also credited with appearing on the band’s first release.

Original keyboardist Alex Casnoff left the band in late 2010, and was replaced by Tay Strathairn.

The band made their television debut on The Late Late Show with Craig Ferguson on April 14, 2010.

Dawes released their second album, Nothing Is Wrong, on June 7, 2011 and toured the US co-headlining with Blitzen Trapper. Dawes played alongside Jackson Browne at the Occupy Wall Streetevent in Liberty Park, on December 1, 2011. The band also appeared as themselves on the February 7, 2012 episode of the NBC television series Parenthood.

In February 2013, the band released the single From a Window Seat from the 2013 album Stories Don’t End on Red General Catalog and Hub Records.

You can get an early listen to Dawes’ upcoming album, All Your Favorite Bands, courtesy of NPR First Listen, here.  I’ve already fallen hard for the song, Things Happen. 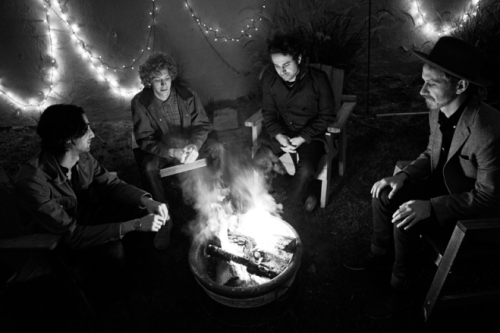 Following are my Top Ten favorite Dawes’ tracks, so far. Will you share yours with me?

1. A Little Bit of Everything
from the album, Nothing is Wrong

“‘Cause it’s a little bit of everything,
the way you choke,
the way you ache,
it is waking up before you,
so I can watch you as you wake.”

2. Time Spent in Los Angeles
from the album, Nothing is Wrong

“But you got that special kind of sadness,
you got that tragic set of charms,
that only comes from time spent in Los Angeles,
makes me wanna wrap you in my arms.”

3. Things Happen
from the upcoming album, All Your Favorite Bands

4. Million Dollar Bill
from the album, Nothing is Wrong

“When it hits me that she’s gone,
I think I’ll be an astronaut,
make the moon my home,
and leave the earth behind.

So, when she steps out into the night,
and finds the light that makes her prettiest,
she’ll be facing me every time she shines.”

5. Just My Luck
from the album, Stories Don’t End

“Just my luck I never said I loved you,
just my luck it completely slipped my mind.
It’s not my colder-hearted tendencies that keeps you from being here with me,
Or the universe’s brilliant designs,
it’s just my luck.“

6. Rest Easy
Bonus track on the album, Nothing is Wrong

7. When My Time Comes
from the album, North Hills

“So, I pointed my fingers,
and shouted few quotes I knew,
as if something that’s written,
should be taken as true.
But, every path I had taken,
and conclusion I drew,
would put truth back under the knife.
And now the only piece of advice that continues to help,
is anyone that’s making anything new only breaks something else.”

9. If You Let Me Be Your Anchor
from the album, North Hills

“I want love to stretch it’s fingers wide,
and touch on all our wandering parts.
Come, sit by my Californian side,
with your Carolina heart.”

10. If I Wanted Someone
from the album, Nothing is Wrong