“Red lips kissin’ away my fears,
a blue kiss bringin’ me back to tears.
Why does it have to be such a blue kiss?”

Blue Kiss is a song written by American musician Jane Wiedlin and American singer/songwriter Randell Kirsch and is performed by Jane Wiedlin. The song was the lead single from her self-titled debut album Jane Wiedlin.

This was Wiedlin’s first musical effort after having left the all-female rock band The Go-Go’s. It reached # 77 on the Billboard Hot 100 and # 30 on Hot Dance Club Play.

The 7″ single was backed with the parent album’s closing album track My Travelling Heart, a Celtic-flavored ballad that deals with Wiedlin’s feelings about the breakup of the band.

An extended 12-inch single was also released, featuring an instrumental version of Blue Kiss, along with two extended dance versions, one of which was remixed by famed Madonna collaborator William Orbit.

Two music videos were produced for the song – one was not released, the other features Jane playing her guitar and singing in the back of a truck travelling a back-road (see above). 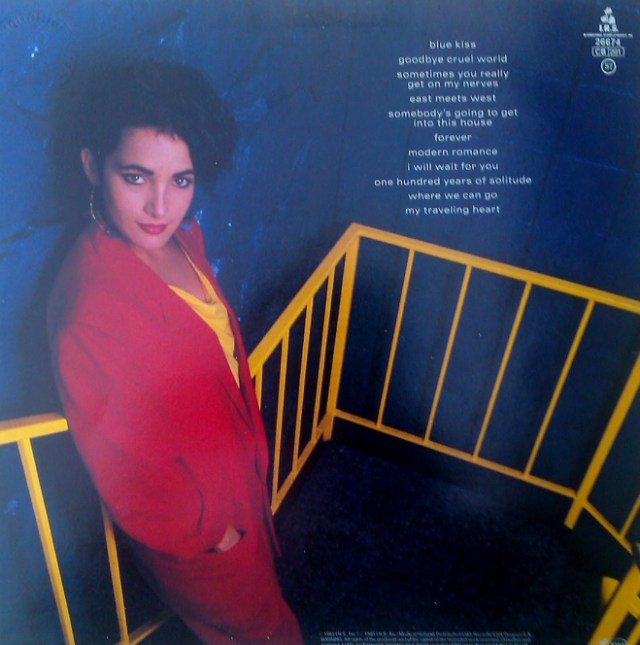 It was my sixteenth birthday when my first kiss happened. It was with a boy I sadly did not like very much, but I was certainly trying to like him. He was one of my best friend’s boyfriend’s best friend, and I had all these fantasies of the four of us double-dating like something out of a TV show I’d watched, and movies like Grease.

I liked the idea of him more than I liked the reality of him, and it was the same with the kiss, I liked the idea of it more than the kiss itself. It happened on the Haunted Mansion ride at Disneyland, his braces cut up my lip, and it just felt awkward and full of too much saliva. This was not the first kiss I’d pictured in my head, or dreamed about while starting at pin-ups of members of Duran Duran and posters of Han Solo.

Nonetheless, it was a first kiss, and we shared more over the two weeks we were a “couple“. I remember this song playing on the radio a lot during this time, and that during one of the boy’s and my phone conversations he had held the receiver up to his bedroom speaker so I could hear this song. When he spoke again it was to ask me what color I thought his kisses were. I’m not sure how I answered that one.

10 thoughts on “A blue kiss coloring me goodbye :: #ThrowbackThursday”