The first time I ever heard Siouxsie sing it was with the Banshees, on a local music video TV show called Video One, in a video for the song Dear Prudence, a cover of a Beatles song that I knew from my childhood, a favorite of my Mother’s. I recognized Robert Smith in the video, The Cure being a favorite band of mine at the time, and was completely fascinated by Siouxsie herself. Her make-up was epic, dramatic and stunning, and dangerous looking. So were her clothes actually, and she didn’t shave her under arms which seemed like some kind of rebellion to me that I just completely admired. I was a parochial school girl, a rule follower, a “good girl” with a lot of pain and secrets, and pretty much invisible, or at least terribly non-descript in how I dressed and made myself up to be.

I secretly wanted to be dramatic and bold, daring and dangerous. 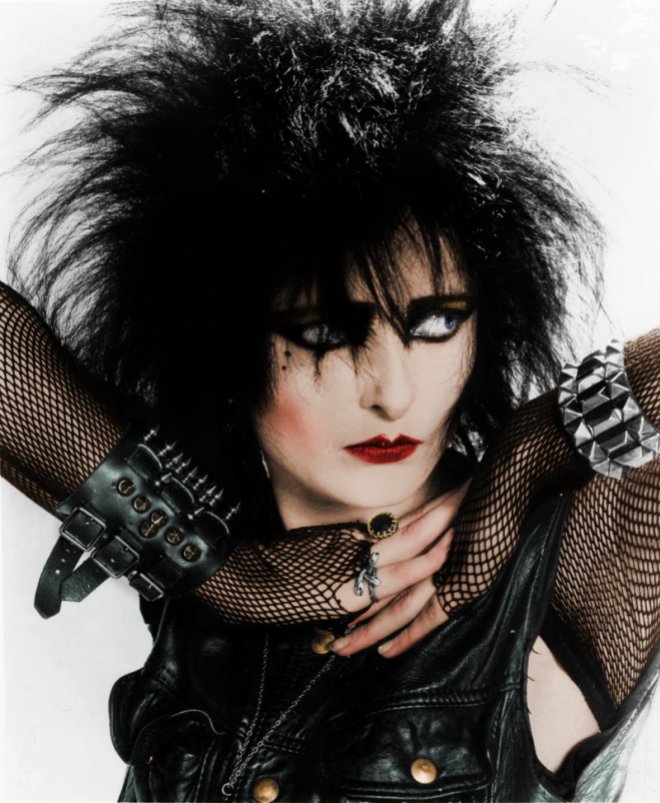 Some of my favorite UK music magazines had features on her, and the Banshees, and I carefully cut-out pictures that I taped up on my wall, and around the mirror on my dresser. I’d practice her make-up in my room at night, never braving to wear it outside of the safety of my own space, but dreaming up a time when I would.

That time would come a few years later, post-high school, at the very end of the eighties. Hollywood and the friends I made there, along with my brave and bold best friend, gave me the courage to experiment with who I was in a million different ways, style being just one of them. Though I think my make-up was a lighter version of Siouxsie’s, I did adopt much of her “gothic” style (though at the time it was termed “deathrock“).

I met a boy once in the parking lot who drove up next to me and asked “do you listen to Siouxsie and the Banshees?” It was a pick-up line, one he’d apparently sat in his car trying hard to come up with. Obviously I did listen, and the line worked as we dated for about a year after that meeting. After a month together I bought him a postcard of Siouxsie and Robert Smith which he taped up to the back window of his truck. 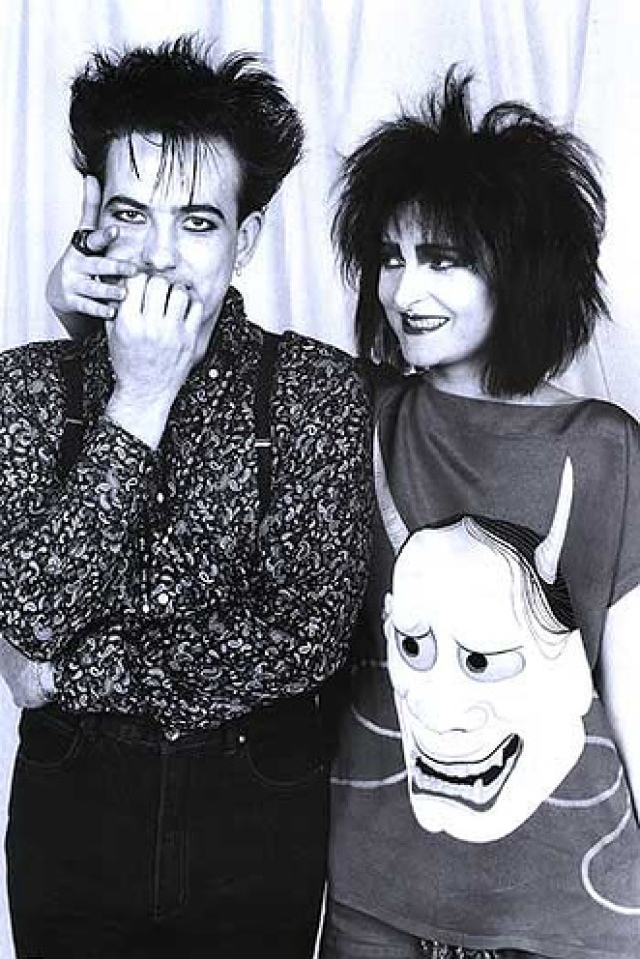 This was the picture on the postcard.

When I moved out on my own I took my Siouxsie style sensibilities along with me. My boyfriend, and roommate, at the time, bought us this amazing wall-sized poster of Siouxsie, Budgie and The Creatures that we hung proudly in our bedroom.

I’ve had the chance to see her play three times, once opening for David Bowie, once as part of the first Lollapalooza tour, and once on her own. The latter was my favorite mostly because it was her show, and the sun wasn’t shining down on her at a huge outdoor setting. I hope I get to see her another time in the future.

Siouxsie was part of my coming-of-age, or more specifically, my coming-into-myself. Her music became part of my own rebellion, part of the mysteries of who I was, and who I could be, and part of my experiences with love and lust and the way they sometimes combine. Her music was part of my personal arsenal against the world.

Siouxsie Sioux is an English singer, songwriter, musician and producer. She is best known as the lead singer of rock band Siouxsie and the Banshees (1976–1996) and its side project The Creatures (1981–2005).

Siouxsie and the Banshees released 11 studio albums and several UK Top 20 singles including Hong Kong Garden, Happy House, Peek-a-Boo plus a Billboard Top 25 hit Kiss Them for Me.

She has also sung with artists such as Morrissey and John Cale. In the mid-2000s, she began a solo career and released Mantaray, in 2007.

Siouxsie was awarded for Outstanding Contribution to Music at the Q Awards and in 2012, at the Ivor Novello Awards, she received the Inspiration Award.

Siouxsie was born Susan Janet Ballion May 27, 1957 at Guy’s Hospital in Southwark, England. She is ten years younger than her two siblings. Her brother and sister were born while the family was based in the Belgian Congo.Her parents met in that colony and stayed working there for a few years. Her mother, Betty, was a bilingual English secretary and her father was a bacteriologist who milked venom from snakes. He was a Belgian Walloon from the French-speaking part. In the late 1950’s, before Siouxsie’s birth, the family moved to England.

Siouxsie had an isolated youth. Her friends invited her home but she couldn’t reciprocate as her father drank at home and didn’t work. She was aware of her family being different. The Ballions weren’t part of the community.

At the age of nine, Susan and a friend were seriously sexually assaulted. The more damaging aspect being the assault ignored by her parents. The episode became an unspoken item. From that moment, she started to acquire disrespect for adulthood. Years later, she stated : “I grew up having no faith in adults as responsible people. And being the youngest in the family I was isolated – I had no-one to confide in. So I invented my own world, my own reality. It was my own way of defending myself – protecting myself from the outside world. The only way I could deal with how to survive was to get some strong armor.”

Her father died when Siouxsie was 14 years old, resulting in an immediate adverse effect on her health. She lost a lot of weight and missed school. After several misdiagnoses, she was operated on and survived a bout of ulcerative colitis. During the weeks of recovery in summer 1972, she watched television in the hospital and saw David Bowie on Top of the Pops.

At 17, she left school. It was during this period that she began frequenting the local gay discos where most of her sister’s friends used to go. She introduced her own friends to that scene. In November 1975, a new young group called Sex Pistols performed at the local art college in Chislehurst. Siouxsie did not attend, but one of her friends told her how their singer threatened the string of students present at that gig. He added that they sounded like The Stooges. In February 1976, Siouxsie and her friend Steven Severin (then still called Steven Bailey) went to see Sex Pistols play in the Capital. After chatting with members of the band, Siouxsie and Severin decided to follow them regularly. In the following months, journalist Caroline Coon coined the term “Bromley Contingent” to describe this group of eccentric teenagers devoted to the Sex Pistols. 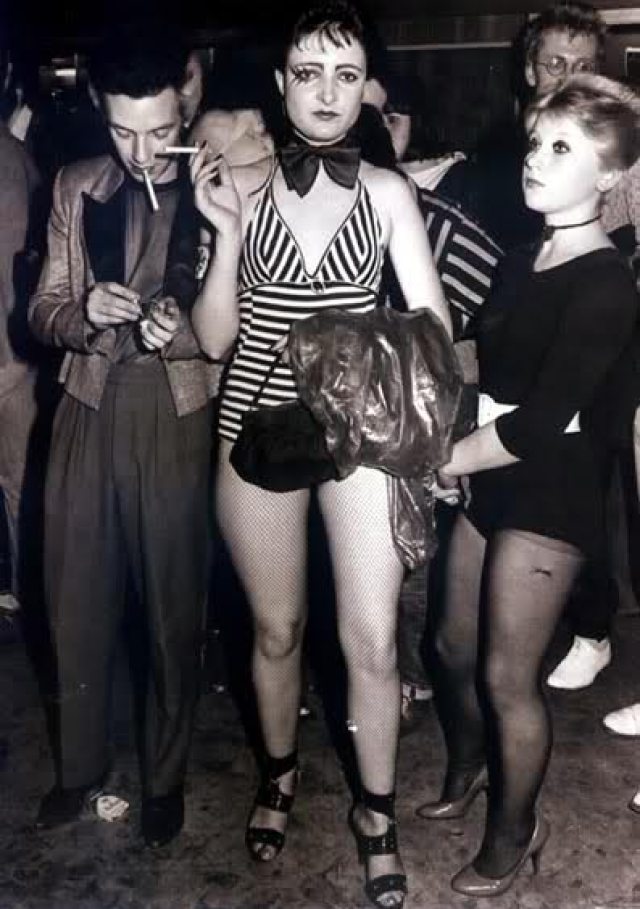 1. Dazzle
from the album, Hyæna

2. The Killing Jar
from the album, Peepshow

“Dust to rust,
ashes on gashes,
hand around the killing jar.”

3. Melt!
from the album, A Kiss in the Dreamhouse

“Can you see,
see into the back of a long black car,
pulling away from the funeral of flowers,
with my hand between your legs.”

4. Peek-a-Boo
from the album, Peepshow

“She has many guises,
she’ll do what you want her to.
Playing dead and sweet submission,
cracks the whip deadpan on cue.”

5. Happy House
from the album, Dreamshow

6. Face to Face
from the Batman Returns soundtrack

8. Helter Skelter
from the album, The Scream

“You may be a lover,
but you ain’t no fucking dancer.”

9. Christine
from the album, Kaleidoscope

10. Take Me Back
from the album, Hyæna

One thought on “Siouxsie Sioux :: My Favorite Artists”