August and Everything After came into my life when I was still trying on my life, sorting out how to be a young Mother, how to be in a relationship that had been fraught with the challenges of moving too fast together, deciding who it was I wanted to be, and trying to figure out exactly how to be a so-called adult. I was 23. Some days I felt so much older, and other days I felt like I was still an adolescent. I felt scared much of the time, vulnerable and confused. My heart wavered, as did my desires and dreams, but is that not par for the course in your twenties?

I did a lot of journal writing back then, as well as long, rambling letters that I would walk to the post office to mail once or twice a week. I worked nights mostly, so my afternoons were spent walking around downtown Fullerton with my baby daughter in tow, wasting hours at the Winged Heart Cafe writing in notebooks, talking with friends, watching bands play. This album was around all the time that year, playing on the stereo of my “on its last legs” first car, and on the stereo in our last apartment together. I wrote the lyrics in letters, at the top of journal pages, the sung out words bleeding and becoming parts of my poetry, my diary confessions, my handwritten letters of longing.

Years went by and my life changed, taking me to many places and through the results of change and connections, of heartbreak and new love, of moving and coming back, and of all that so-called growing up that I was (am) always trying to get through. August and Everything After stayed with me like a best friend, and then Recovering the Satellites came along to steal my heart, and oh my stars This Desert Life that I loved and am inspired by so much that it is the “working title” of my novel, and then Hard Candy and Saturday Nights and Sunday Mornings, and most recently, Somewhere Under Wonderland, and all of their albums, they have become a part of my personal soundtrack, there to serenade me, to comfort me, to let me cry to, love to, learn about myself to.

I have gotten the opportunity to see them play live twice, and I hope they come back around in 2015 to support Somewhere Under Wonderland, because seeing this band live is fucking amazing. The live versions of their songs, especially the ones that they have revised live, lengthened and added to, and often ad-lib to, are something beyond description. I am always so emotionally moved by their concerts that I invariably wind up in tears. They are one of those bands that I want to drag everyone I know to see, even if they think they are not a fan.

As for me, I know I am forever a fan, and Adam Duritz is forever one of my favorite singer-songwriters. If I ever were to even consider writing songs, he would be one of my inspirations, someone I’d love the chance to try and write a song with. 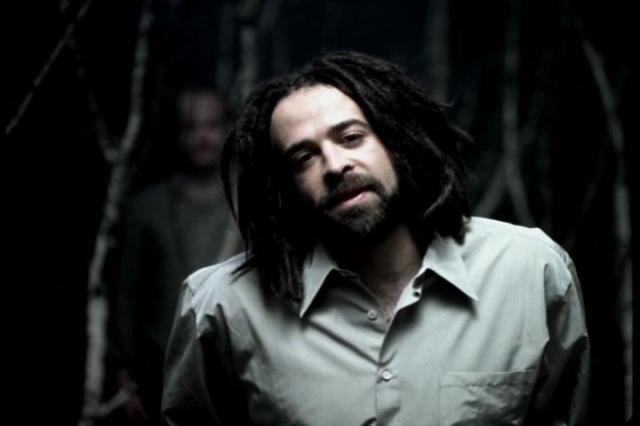 Counting Crows gained popularity following the release of their debut album, August and Everything After (1993), which featured the hit single Mr. Jones. They have sold more than 20 million albums worldwide and received a 2004 Academy Award nomination for their song Accidentally in Love, which was included in the film Shrek 2.

The band lists their influences to include Van Morrison, R.E.M., Mike + The Mechanics, Nirvana, Bob Dylan, and The Band.

Singer Adam Duritz and guitarist David Bryson began playing San Francisco coffeehouses together, performing under the name Counting Crows. The name was taken from One for Sorrow, a British divination nursery rhyme about the superstitious counting of magpies, a member of the crow family. Duritz heard the rhyme in the film Signs of Life, which starred his close friend, actress Mary-Louise Parker. Developing a following in the Bay Area and deciding to expand the band, Duritz and Bryson kept the name as they added members.

The most common modern version of the rhyme:

One for sorrow,
Two for joy,
Three for a girl,
Four for a boy,
Five for silver,
Six for gold,
Seven for a secret never to be told.

The rhyme is featured in the third verse of the song A Murder of One on the band’s debut album August and Everything After. 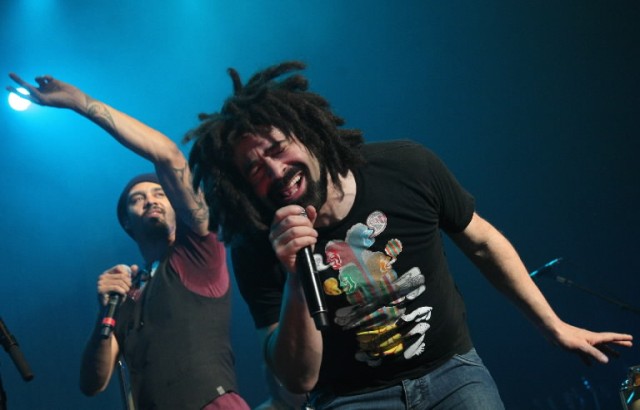 Counting Crows, and Adam Duritz in particular, have become renowned for the energetic, passionate nature of their live performances. Duritz frequently extends and rewrites songs live, adding extra verses or alternate middle sections and/or endings, sometimes fitting most of another of the band’s other songs into the middle of the first. Duritz often uses other artists’ lyrics in these sections as well, ranging from well-known acts, such as Bruce Springsteen, Van Morrison and George Gershwin, to obscure Bay Area bands, including revisiting material from his days working with Sordid Humor.

1. A Murder of One
from the album, August and Everything After

“I dreamt I saw you walking up a hillside in the snow,
casting shadows on the winter sky as you stood there counting crows:
one for sorrow,
two for joy,
three for girls and four for boys,
five for silver,
six for gold
and seven for a secret never to be told.”

2. Holiday in Spain
from the album, Hard Candy

“I’ll be your engine drive in a bunny suit.”

3. Round Here
from the album, August and Everything After

“She walks along the edge of where the ocean meets the land,
just like she’s walking on a wire in the circus.”

4. Mrs. Potter’s Lullaby
from the album, This Desert Life

“If dreams are like movies then memories are films about ghosts.”

5. Anna Begins
from the album, August and Everything After

“‘If it’s love’ she said, ‘then were gonna have to think about the consequences’.”

6. Catapult
from the album, Recovering the Satellites

“All of these quiet battered voices,
wait for the hunger to come.
We got little revolvers,
and stupid choices,
and no one to say when we’re done.”

7. All My Friends,
from the album, This Desert Life

“I just wish I had known to go out walking in the sun,
to find out if you were the one.”

8. A Long December
from the album, Recovering the Satellites

“Wash your eyes clear of anything,
make them empty circles.
Dress yourself in black of gray.”

10. Palisades Park
from the album, Somewhere Under Wonderland

“It’s a long wait and a long life,
cars frozen in flight,
all the traffic stops to stare,
at a crosswalk in Reno, Nevada,
where nothing but air and a pair of gray paper wings.”