Our next installment of Thursday’s TV Halloween here at lyriquediscorde is a peek at the Buffy the Vampire Slayer Halloween episode entitled “Halloween“. This was one of two Halloween episodes that aired during the run of the series, and though each are great fun, this earlier episode is my favorite. Keep reading to discover my picks for the best moments, music, costumes and any other tricks or treats that can be found in this episode of one of my favorite TV series. “Halloween”, Episode 6 of Season 2, airing originally on October 27, 1997.

For most people Halloween is a time of year where you get to dress up as someone that you are not in your regular, day-to-day life. Perhaps it is an aspirational costume, a character or trait of some kind that you wish you could be (at least for a day, or night), maybe it’s something silly, or someone completely opposite of yourself, or it could be a character so fictional that it gives you the chance to disappear completely, shedding (or in this case covering) your skin in order to be someone else for an annual celebration of “disguise“. But what if you became the costume? Would it still be an enjoyable experience? Would you be able to deal with your life as someone else? “Alright, let’s-let’s-let’s review. Um, so everybody became whatever they were masquerading as.” ~ Giles

“Right. Xander was a soldier and Buffy was an eighteenth-century girl.” ~ Willow

I’m not sure I could pick a moment exactly, its more the entire concept, at least the one applied to our main “Scooby Gang” circa Season 2. My heart goes out more to Willow, but that could be because she was always the character I related to. Her struggle to be something she perceives as wild and daring, hiding “that side” of herself instead in a ghost sheet, becoming so invisible that she is not there at all, was something the adolescent part of me could completely understand.

In the end though, once the “trickster’s” trick is revealed, and everyone is returned to their “normal” selves, and for Willow, she is corporeal again, she is changed some. She’s gained a bit more confidence, shedding her ghost sheet and heading home in the original “wild and daring” costume she’d originally wanted to wear. That confidence is the what Oz finally sees when he drives by, saying out loud, “who is that girl?” It wasn’t the costume though, it was the confidence, that helped her be “seen”, and all of that, in the story, I really enjoyed.

Buffy and Xander’s storyline is great, too – Xander wanting to be the hero, and Buffy wanting a break, but it is Willow’s that I love the most.

There are two songs in this episode, and this one is my favorite: 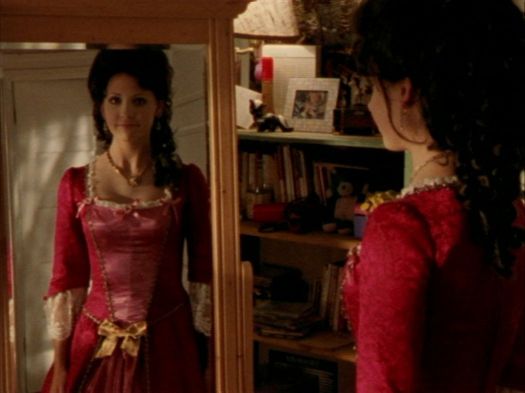 I think I’d pick Buffy’s this year as my favorite, especially since my life has been very stressed lately and I could use being a little “helpless noble woman” right about now. 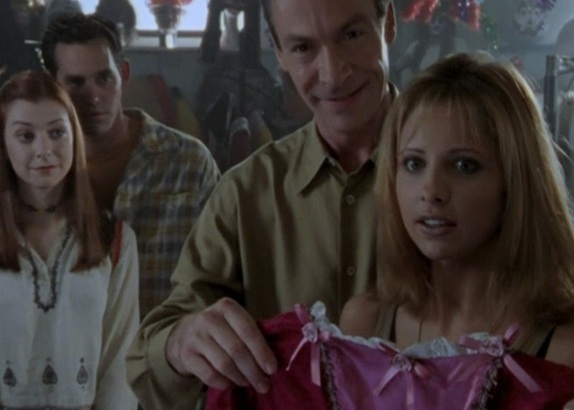