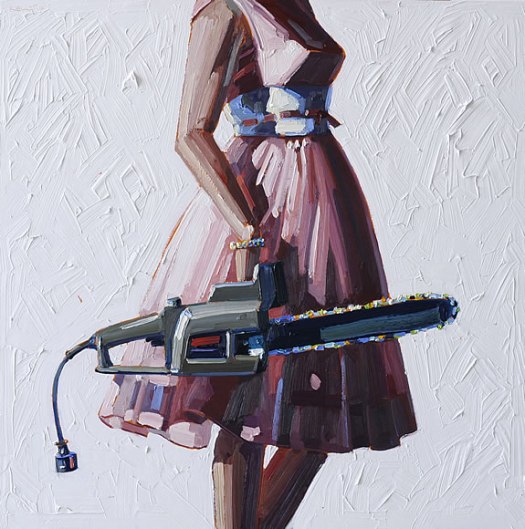 “Baby says,
she’s dying to meet you.
Take you off and make your blood hum,
and tremble like the fairground lights.”

Laney cut like a sharp knife in a cold, cold night, slicing through his skin in the most exquisite of ways. She was like that, brutal sometimes, icy and serrated at the edges, yet so damn beautiful. She wore thrift shop 50’s Be-Bop dresses, the kind that you would fill-up with petticoat layers, in the palest pinks and baby blues.

Laney would pair that up with knee high, steel toe work boots, the kind his Father wore on construction jobs, and sometimes she dyed her hair those same Easter egg colors, other times, she “painted it black” – her hair, nails, dresses, moods.

Jeff had noticed her hanging outside of the liquor mart, batting her fake eyelashes at men twice her age in order to score a bottle of anything strong. They were vying for the chance to oblige with hunger in their eyes. He grinned as he walked behind her, noticing the switch blade in her left hand, like a fingers-crossed lie told with a smile. He went inside and bought a bottle of whiskey which he sat down at her feet, winking once, and then walking away.

He only looked back long enough to see her pick up the bottle and squint at the label, right at the spot where he’d marked his name and number. He was not willing to risk the blade just yet, not there in a parking lot full of desperation zeroes with their comb overs and Old Spice aromas, but maybe, just maybe, he’d let her cut him up in private.

Jeff would let her do more than that. He would hand over his guitar, his band, part of the small stages they gigged at, his leather jacket, two-thirds of his bed, and his body anytime she would have it. He would let her scar him up with love, or lust, or because it was Tuesday, if that’s what she wanted.

Though in the late nights when he lay in bed alone he wondered if his accommodations that he lay at her feet was what she really wanted. Did the girl in the baby doll dresses and kick your ass boots want to hold the strings, or was she out somewhere, with him left here alone, looking for someone to take the lead away from her?