Fairytale of New York :: The Pogues, featuring KirstyMacColl
from the album, If I Should Fall From the Grace of God

Fairytale of New York is a Christmas song by the Celtic punk group The Pogues, released in 1987 and featuring singer Kirsty MacColl. The song is an Irish folk style ballad, written by Jem Finer and Shane MacGowan, and featured on The Pogues’ album If I Should Fall from Grace with God. The song features string arrangements by Fiachra Trench. It has been cited as the best Christmas song of all time in various television, radio and magazine related polls in the UK and Ireland.

The song was originally planned as a duet by Shane MacGowan and Pogues bassist Cait O’Riordan, but O’Riordan left the band in 1986 before the song was completed. The Pogues were at the time being produced by Kirsty MacColl’s husband Steve Lillywhite, who asked his wife to provide a guide vocal of the female part for a demo version of the song. The Pogues liked MacColl’s contribution so much that they asked her to sing the part on the actual recording.

The song follows an Irish immigrant’s Christmas Eve reverie about holidays past while sleeping off a binge in a New York City drunk tank. When an inebriated old man also in the cell sings a passage from the Irish ballad The Rare Old Mountain Dew, the narrator (MacGowan) begins to dream about the song’s female character. The remainder of the song (which may be an internal monologue) takes the form of a call and response between the couple, their youthful hopes crushed by alcoholism and drug addiction, as they reminisce and bicker on Christmas Eve.

MacColl’s melodious singing contrasts with the harshness of MacGowan’s voice, and the lyrics are sometimes bittersweet—sometimes purely bitter: “Happy Christmas your arse/I pray God it’s our last“. The lyrics “Sinatra was swinging” and “cars as big as bars” seem to place the song in the late 1940s. The title, taken from author J. P. Donleavy’s novel A Fairy Tale of New York, was chosen after the song had been written and recorded.

At first, this song had lyrics about a sailor and a distant ocean, but Finer’s wife suggested he change it to be about a couple at Christmas who are hard on their luck. Finer wrote another song and took both to MacGowan, who combined the melody of the first with the story line of the second.

The song originated with a bet by Elvis Costello that Shane MacGowan and Jem Finer couldn’t come up with a Christmas record that wasn’t slushy.

The song was released in the United Kingdom and Ireland in November 1987 and swiftly became a hit, spending five weeks at # 1 in the Irish charts. On December 17, 1987, the Pogues and MacColl performed the song on the BBC’s popular television show Top of the Pops, and it was propelled to number two on the official UK Top 75. For the Top of the Pops appearance, the BBC insisted that MacColl’s singing of “arse” be replaced with the less offensive “ass“, although as she mimed the word MacColl slapped the relevant part of her body to make it clear what was meant.

Although the song finished 1987 as the 48th best seller of the year despite only a single month’s sales, it was denied the Christmas # 1 spot by the Pet Shop Boys’ cover of Always on My Mind. MacGowan is said to have commented on this in his typically forthright manner:

“We were beaten by two queens and a drum machine“.

MacColl later said that she did not feel they were really in competition with the Pet Shop Boys as they were doing a completely different kind of music.

The song was re-released by The Pogues in the UK in 1991 (reaching # 36), and again in the UK and Ireland for Christmas 2005, reaching # 3 in the UK. All proceeds from the latter release were donated towards a mixture of homeless charities and Justice for Kirsty, a campaign to find out the truth behind MacColl’s death in 2000. Due to the eligibility of downloads to chart even without a physical release, the song has re-entered the Top 75 every December since 2005. It has now made the Top 20 on ten separate occasions including nine times in successive years, and the Top 10 on four separate occasions including three times in successive years, feats that no other single can match. In the run-up to Christmas 2013 it has so far charted at # 16. Its eleven visits to the chart now total 60 weeks on the official UK Top 75 (as at week’s end December 14, 2013), making it the 14th most charted song of all time. In late 2012 it was declared a UK million-seller.

On 22 December 2005, The Pogues performed the song on a Jonathan Ross Christmas special on BBC One in the UK, with the female vocals taken by singer Katie Melua. This was The Pogues’ first television performance of the song since 1988.

Fairytale of New York was announced as Britain’s “favourite Christmas song” in a 90-minute special on ITV on December 22, 2012, following a nationwide survey of ITV viewers.

In December 2012, the song was reissued to mark its 25th anniversary.

The policeman pushing Pogue Shane MacGowan through the station at the beginning of the music video (see above) is the actor Matt Dillon.

Editor’s Note: My second favorite Christmas song of all-time. I once attended a wedding of two friends who sang this song to each other right after their vows – it was brilliant. 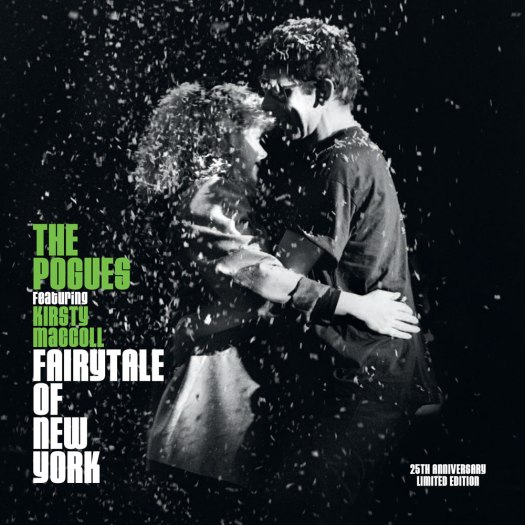